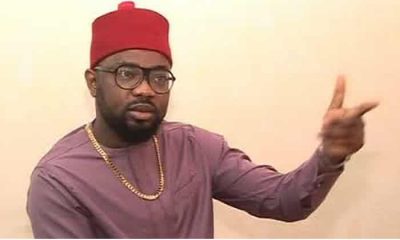 Traditional ruler of Obosi town in Anambra State, Igwe Chidubem Iweka II, has suspended Chief Osita Chidoka, who is a former Minister of Aviation and spokesman of Atiku Abubakar Presidential Campaign Council, from the Council of Chiefs.

Iweka announced in a statement during the weekend the suspension of Chidoka, and two others, Chief Linus Mgbakaogu and Chief Hyacinth Udemba for their alleged involvement in bringing the corpse of two Obosi youths killed during the March 9 re-run election to the palace.

The statement signed by Dr Benneth Mozie on behalf of the monarch and his chiefs in council, said the act was a sacrilege in the tradition of Obosi kingdom which forbids the king and his council from seeing human corpse.

The statement reads, “On arriving at the palace, these chiefs in council instructed that the corpse be off loaded and dumped in the palace, an insulting and dishonouring act, an abomination of the gravest magnitude.

“After due consultations and deliberations with all relevant ancient traditional bodies of Obosi, the Igwe Iweka II in council, hereby announces the indefinite suspension from his cabinet of the above mentioned three chiefs.

“This suspension is for their acts of sacrilege against the revered age-old customs of the people and Obosi ancient kingdom,” he said.

However, Chief Anthony Nwabude, the Traditional Prime Minister of Obosi (Onowu Obosi), who was at the palace when the suspension was announced, told journalists that there was no time the content of the statement was discussed or resolved by the council.

Nwabude, an octogenarian and one of the oldest members of the council, said he could not sit back and watch a decision he was not part of foisted on him without talking.

“There was never a meeting where the cabinet met to discuss and come up with the resolution that was read.

“Since the killings, the cabinet has never met to discuss it; so, I am not in support of it,” he said.

In his reaction, Mgbakaogu one of the affected persons, dismissed the news of his suspension as a kangaroo exercise, saying he remained the (Atta Obosi).

Mgbakaogu told reporters the monarch could not suspend any member of the cabinet without convening a general meeting of the council.

He accused him of delving into partisan politics which had made him to mishandle the affairs of Obosi.

“Two Obosi sons were killed because of election and the youths of the town insisted on taking their corpse to their king in protest of numerous deaths we have witnessed, and the three of us were there to witness what happened.

“The Igwe has had running battles with Obosi community and presently there is a panel of inquiry looking into these issues, we are still expecting the white paper from Anambra Government.

“I am not surprised at the purported suspension which cannot stand, I have been in the traditional cabinet for nine years and eight months, long before he became an Igwe, so I remain Atta Obosi,” he said.

Publisher and Editor in Chief - Magazine and Online Tel: 08038525526 - 08023339764 - 08055657329 Email: startrendinter@gmail.com
Previous As Favour-Seekers, Flatterers, Career Sycophants Loom Round Dapo Abiodun…What The Governor-Elect Needs To Know
Next OpinionBola Tinubu: The Man Who Is For Everybody, Somebody