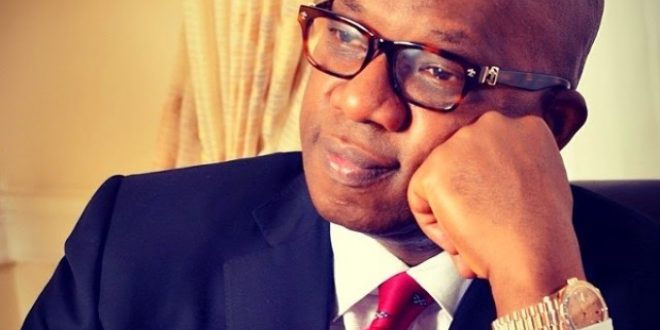 By May 29, 2019, Dr. (Prince) Dapo Abiodun would be officially sworn in as the Governor of Ogun State.

It is a fitting culmination of a long political journey that began in the early 90s when he was first elected a Senator at the young age of 32, but didn’t make it to the hallowed chambers of the National Assembly due to the military incursion of 1993.

From the moment he was declared winner of the hard-fought election, the billionaire businessman has been buffeted with torrents of congratulatory messages from far and near, from acquaintances and associates, and predictably, from favour-seekers and career sycophants who loiter the corridors of power, that class of opportunists known as Any Government in Power (AGIP).

Pages of newspapers are being taken over for congratulatory advertorials even by those who stood aloof or did not believe he stood a chance in the election. Being a privileged man, one of Nigeria’s most successful entrepreneurs, Abiodun is not new to fawning crowds who grovel and enforce outrageous displays of ingratiation to curry one favour or the other.

In politics however, it is a different ball game; this crowd is varied and versed in their art form. Now that Abiodun is being ushered into a period of spectacular bowing and scraping, in which profiteers compete publicly in stroking the ego of their boss, caution must be the watchword.

Flatterers know that as a new man in power, he must still be learning the ropes and flattery can be used effectively to gain favours but instead of believing it, all the warning bells should go off. This is the crux of the matter.

The culture of AGIP has been one ill which Nigerian democracy is not about to be healed of. It is one sector in Nigeria’s democratic configuration that those who know their way around the labyrinth of power profit from. Many of these people have started taking strategic media platforms to identify with Abiodun.

All these should not come as a surprise because it is the nature of success – when achieved, many come to it as family members. Abiodun’s ride to victory did not come by mere rhapsodizing or barnstorming, there were negotiations and agreements with different power blocs, some of who are just opportunists who quickly aligned themselves for their selfish interests.

Allowing these people a free reign in his government will deprive the hapless citizens who voted him into office proper governance, slow down development and the growth of democracy.

His homes in Lagos and Ogun States have since become a Mecca of a sort while his entourage has increased with people who have already self-appointed themselves as his aides. With the vigour of a newborn grasping a lock of hair, this group is now forming a ring around the governor-elect.

And it is the same as other governor-elects around the country. Abiodun’s case is however different because like Lagos, Ogun is a strategic state. When the cost of doing business rose in Lagos State, many manufacturers were forced to relocate to neighbouring Ogun State with the spin-off effects of employment for the locales and increased Internally Generated Revenue.

In the last few years, the National Bureau of Statistics (NBS) has consistently rated Ogun as only next to Lagos State in terms of IGR.

So, Governor-elect Abiodun is a prime target. Government office is a public trust and he should see it as such.

He would need a lot of tact and diplomacy in managing these people who would praise him to high heavens for constructing a road or paying salaries with tax payer’s money as if he had done something unprecedented.

They are dangerous because it’s so easy to fall for their lines. The governor-elect must discourage unsolicited advice, reduce his entourage and snap the whip when he notices he is being lied to.