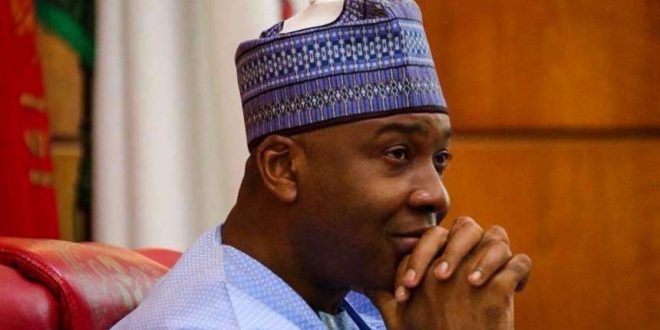 REVEALED: How Saraki Allegedly Brought Intercontinental Bank To Its Knees

An ongoing trial into the finances of the defunct Intercontinental Bank Plc has revealed how Senate President’s huge debt was written off in dubious circumstances contributing the bank’s crumbling.

At a Federal High Court sitting in Lagos, it was revealed how billions of Naira of loans were taken by the Senate President, Bukola Saraki and many other individuals from the defunct bank and written off by Akingbola’s successor, Mr. Lai Alabi.

Jimoh Abdulraheem, the EFCC prosecution witness, made the revelation while being cross examined by the defence lead counsel, Chief Wole Olanipekun

Akingbola was re-arraigned last month at the Federal High Court following a further amendment to the charges, which the EFCC filed against him before the Lagos State High Court since 2009.

EFCC, in the amended charge, alleged that while Akingbola was the Managing Director and Chief Executive Officer of Intercontinental Bank Plc, he used N179, 385,000,000 belonging to the bank for “fictitious transactions.”

It said Akingbola violated Section 15(1)(a)(i) of the Failed Banks (Recovery of Debts) and Financial Malpractices in Banks Act, Cap F2, Laws of the Federation of Nigeria, 2004 and was liable to be punished under Section 16(1)(a) of the same Act.

At a recent proceedings, while being cross-examined by Olanipekun, the witness, Jimoh admitted that a company linked to the Senate President, Dicetrade Nigeria Limited, was indebted to Intercontinental Bank Plc, in the sum of N1, 892, 313, 792.

The EFCC’s witness who was the Chief Investigator of Intercontinental Bank Plc, also admitted that another company linked to the Senate President’s father, Late Olusola Saraki, Skyview Properties, was indebted to the bank to the tune of N2.88 billion.

The witness, when asked by Olanipekun (SAN) if he was aware that Lai Alabi who took over from Akingbola, in order to write off all the indebtedness because people involved were closed to him, said he was only aware that Alabi granted waiver for some non-performing loans.

The witness, when asked if the loan taken by Akingbola’s Tropic Securities and Tropic Properties, were queried by anyone in the bank before his investigation into the bank, said the loans were only queried after he submitted his report to Alabi.