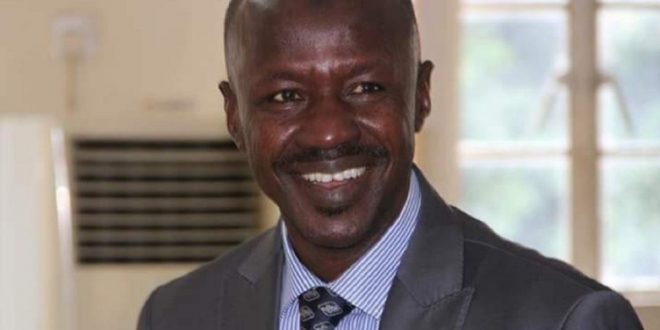 StarTrend April 9, 2019 HEADLINE, NEWS Comments Off on How Powerful Politicians Allegedly Looted Over N1Trillion Plot To Push Magu Out Of Office To Cover Their Tracks 16 Views

Indications emerge on how the job of the Acting Chairman of the Economic and Financial Crimes Commission (EFCC), Mr. Ibrahim Magu may again be on the line as more powerful forces team up to ensure that he quits.

Recall that the appointment of Magu had earlier pitched the Executive against the Legislative arm of government under Bukola Sraki when the latter refused to confirm him and asked the Executive to appoint another person.

The Executive arm under President Muhammadu Buhari had refused to do so. Instead, Magu was left to still work in acting capacity since then.

Meanwhile, ahead of May 29 exit date, some governors, ministers, and senators are pushing for the removal of the Acting Chairman of the Economic and Financial Crimes Commission (EFCC), Mr. Ibrahim Magu, The Nation reports.

They are mounting pressure on some Presidency officials to prevail on President Buhari to “ease out” Magu.

It was learnt that many governors are jittery about Magu’s retention, following the clinical investigation of the outgoing Chief Justice of Nigeria, Justice Walter Onnoghen. This is the third time in two years that attempt has been made to give Magu the push from office by some politicians who are opposed to Buhari administration’s anti-corruption campaign.

There was a plot in January to send Magu on a course at the National Institute for Policy and Strategic Studies (NIPSS) on or before the conclusion of the general elections. The latest move is to sack Magu on or before May 29 when some of the governors would have completed their eight-year tenure.

A source, who spoke in confidence with our correspondent, said those who wanted Magu out had been alleging that the EFCC chairman’s stay might not assist the interest of the All Progressives Congress (APC) in 2023. The source said: “The arrowheads, including outgoing governors, have begun smear campaigns to poison the minds of Buhari, Vice President Yemi Osinbajo and the First Lady, Mrs. Aisha Buhari, against Magu.

“They are said to be relying on three bogus/ fake reports against Magu allegedly submitted to the Presidency by an unknown government agency. They are also alleging lack of loyalty against Magu, claiming that he is working against APC’s interest from now till 2023. They cite how EFCC’s probe led to Onnoghen’s sudden resignation. They allege that Magu can go to any length to expose them, especially the outgoing governors, when they leave office.

“They are of the opinion that since they have skeletons in their cupboards, Magu can prosecute them once he is still in office. The promoters of the plot have co-opted politically exposed persons in the APC and the PDP.”

It was learnt that some Senators have also teamed up with aggrieved political office holders on the anti-Magu campaign.

The source added: “Some senators are jittery over possible confirmation of Magu after May 29, as they are afraid that he may go after them once they lose their privileged positions. “They are aware that there are pending investigations against them, including over N1trillion unexecuted constituency projects. Magu is uncompromising in this regard.”

More developments on this are expected to play out as time goes on. Whether the people will succeed in this alleged anti-Magu move is a matter of time.