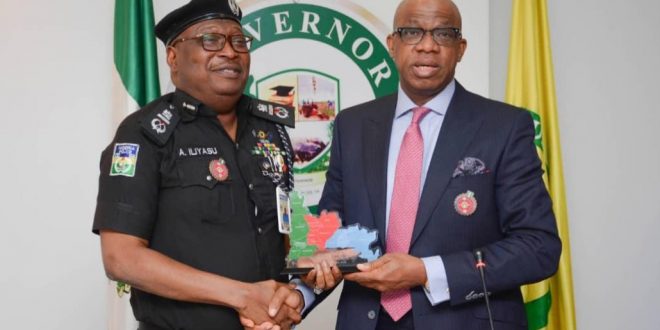 Our Security Masterplan Is Near-Perfect – Abiodun 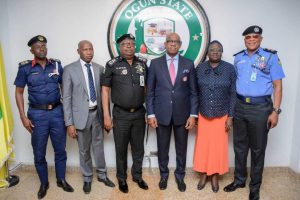 ABEOKUTA: The Ogun State Governor, Prince Dapo Abiodun has said that with communication components being mainstreamed into the state architecture, security arrangement would be near-perfect in the state.

According to a press release e-signed and made availabile to StarTrend Int’l magazine & www.startrendinternational.com by S.F. Ojo, SA Ogun Media, Abiodun noted that when completed, criminals would have no hiding place.

Not only would the tracking devices ensure smooth communication among the security outfits in the state, they would also ensure that all patrol teams are where they claim to be.

Prince Dapo Abiodun made these disclosure on Tuesday, January 7, 2020 while he received AIG Ahmed Iliyasu, the Assistant Inspector General of Police, Zone 2, in his office.

He said that his administration was on the verge of completing its communication setup which would avail security outfits in the state the opportunity to monitor activities of their patrol teams.

His words, “We are on the verge of concluding the installation of communication equipment that will enable the Commissioner of Police, the Director, State Security Service, the Commandant, Civil Defence and all the rest of our law enforcement team, communicate with each other.

“The communication equipment will not only allow them to speak to the patrol team, but also to determine their location at different point in time”.

The Governor also noted that his administration in collaboration with its sister states had met and came up with a joint patrol team that would see to issues bordering on armed robbery, kidnappings in the South West, adding that the security outfit named ‘Amotekun’ would patrol the six states that make up the zone.

“We are also appreciative of the steps the Inspector General of Police has taken, particularly with the initiative of the Community Policing, because we believe that it is easier for people who are indigenes of particular areas to understand the behavioral patterns of those areas better than people who are ‘non indigenes’.

Abiodun also noted that his administration is doing all in its power to improve on the living condition of men of the state’s law enforcement architecture by improving the conditions under which they work, adding that the Security Trust Fund was not just set up to buy vehicles, but to ensure that the vehicles are well fueled, managed, maintained and above all ensure that the welfare of the men to be assigned to the vehicles are well managed.

“We are also doing everything that we can to ensure that we support the men of our law enforcement architecture by improving the conditions under which they work, our security trust fund is not just set up to purchase equipments for the police, but to also ensure that the vehicles are well fueled, managed, maintained, the fund will also ensure that the welfare of the men that will be assigned to the patrol team using those vehicles and motorcycles is also taken into consideration, so that they are better motivated to carry out their responsibilities,” he said.

In his remarks, the AIG, zone 2 of the Nigeria Police, comprising of Lagos and Ogun State, AIG Ahmed Iliasu, commended the governor for his concern for the security of the state, noting that since his emergence as governor, he had improved on the security architecture of the state with the provision of basic security infrastructure for the use of the command in the state.

While commending the governor for launching the ‘Operation Sweep’ to secure and raid the water side areas of the state of cultists, kidnappers, Iliasu disclosed that the Nigeria Police Force is currently going through some certain and definite changes that will move the force from a mundane traditional level to a more technical and technological driven operation.

He noted that the Inspector General of Police, through the Federal government recently launched scientific equipment that will help in intercepting. tracking and also bringing down criminal elements in most of the black spots of the nation, assuring the state of the commitment, resilience and loyalty of the zone to the democratic institution in the state.