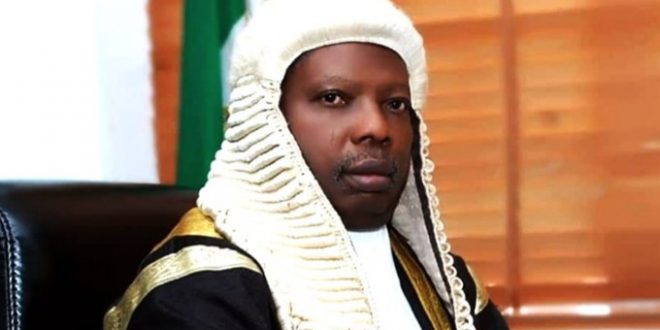 By Raymond Osho
The Speaker of Ogun State House of Assembly, Hon. Kunle Oluomo has decried corruption plaguing the country’s legislation, saying legislation in Nigeria should be a part time job.

In Oluomo’s opinion, if legislation is made a part-time job Senators would no longer see it as a means to amass wealth, but to serve the interests of Nigerians.

The Speaker who expressed total disagreement over the Nigerian Constitution maintained that Senators are supposed to be paid per sitting and not the huge monthly income plus the heavy allowances.

He spoke on Thursday June 26, 2019 at a Strategic Legislative Luncheon organised by the Committee For The Defence of Human Rights (CDHR) in Abeokuta, the State capital.

The Speaker spoke on the theme “Legislative Agenda For Good Governance”.

He said “I disagreed with the Constitution of our country. Legislation is supposed to be part-time, if it is part-time, Senators will be paid by number of sitting. But unfortunately, this may not be possible because the Constitution has been designed in a way that Senators are not to do any other business while serving”.

Oluomo added “Senators are supposed to go about their businesses and if there is any issue to iron out in the country or law to enact they would convene a sitting”.

Giving his legislative agenda as the Speaker of the State’s 9th Assembly, Oluomo pledged to ensure that the State have participatory legislature, translate the State’s Constitution into a local language (Yoruba) for the benefit of people of the State and training and welfare of legislators.

In his keynote address, the Pioneer Secretary of CDHR, Comrade Debi Adeniran supported Oluomo’s submission, saying that the business of legislation is supposed to a part-time.

He told the audience, “If legislators at the National Assembly are sincere with you all, they will not see the business of legislation as a means of making money.

“Needs assessment should be carried out by legislators. They should go back to their constituencies and asked the people what they want”.