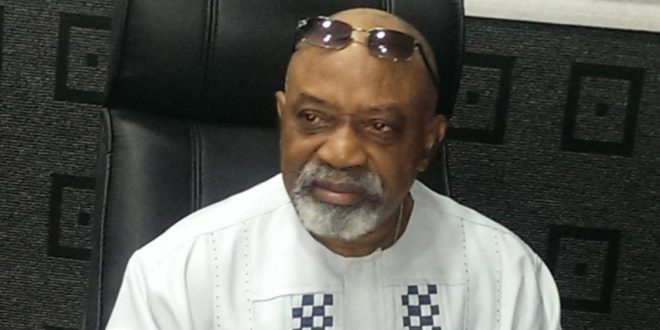 StarTrend April 26, 2019 HEADLINE, NEWS Comments Off on Ngige Under Fire Over Comment On Doctors 14 Views

Minister of Labour and Employment, Dr Chris Ngige, on Wednesday April 24, 2019, came under fire over his comment that he was not bothered about the decision of medical doctors who choose to leave Nigeria to practice outside the country.

From reactions of medical professionals to other comments on the social media, it was bashing for Ngige, who many regretted could make such comment, especially as a medical doctor himself.

The minister was a guest on Channels TV Sunrise Daily and had, in the course of the programme, said the movement by doctors to foreign countries was not alien to Nigeria because he was taught by Indians in secondary school.

“I’m not worried, we have surplus (doctors). If we have a surplus, we export. I was taught Biology and Chemistry by Indian teachers in my secondary school days.

“They are surplus in their country. We have a surplus in the medical profession in our country. I can tell you this. It is my area, we have excess. We have enough, more than enough, quote me.”

Ngige, when asked if nothing was wrong, owing to his position as a qualified medical doctor, said there was nothing wrong in their choice to practice overseas.“There is nothing wrong, they go out to sharpen their skills, earn money and send them back home here. Yes, we have foreign exchange earnings from them, not from oil,” he said.

The minister said the move did not amount to brain drain, adding that “they are better trained because of the facilities they have there. Eventually, I know a couple of them who practice abroad but set up medical centres back home. They have CT scan, MRI scan which even the government hospitals cannot maintain. So, I don’t see any loss.

The comment, however, drew the ire of Nigerians, including the leadership of the Nigerian Medical Association (NMA).

National President, NMA, Dr Francis Faduyile, said it was unfortunate that such a statement could emanate from a senior medical personnel.

“The statement is unfortunate given the current doctors to patient ratio in the country,” he said.

He said by World Health Organisation (WHO) standard, there should be a doctor to patient ratio of 1:500.

“In Nigeria, we have ratio of one doctor to 10,000; you cannot say doctors are not in good numbers in Nigeria.

“Does it make any significant reasoning for us to say we need doctors to move from where we have 0.2 doctors to 1,000 to where there is 2.8 doctors to 1000

“So we have gross shortage of medical personnel in this country. We have about 40,000 doctors taking care of over 200 million Nigerians.

“Some state governments have less than 50 doctors in their employ in the entire state, to show that we have gross shortage of doctors. So that assertion is wrong.

“It is unfortunate that it is coming from a senior medical doctor for that matter.

“So, NMA strongly objects to that statement that we have enough medical doctors that we can still afford to have people to leave this country,” he said.

Also reacting, national president of Association of Resident Doctors (ARD), Dr Olusegun Olaopa, said such statement as this from handlers of the Federal Government  “makes one to wonder if the government is truly sincere in its efforts to solve problems of inadequate manpower in the health sector.

“Does the Minister of Labour even know the number of doctors in Nigeria or when was the last time he was involved at the provider end of health care?”

He said doctors in Nigeria overworked themselves, even in urban setting, adding that non-availability of medical personnels in the rural places and hinterland left much to be desired.

“The minister is totally ignorant of the health system situation in Nigeria and it is unfortunate that someone who should know better makes such spurious pronouncement on the national television.

“The minister has just spoken as a politician and nothing more. We strongly doubt he represents the views of his paymasters.

“Nigeria continues to lose doctors to other countries across all level but the worst hit are those with advanced medical training who are required to use the national investment and training for the betterment of the populace,” he said.

Also, the social media buzzed almost on a per-minute basis, on Wednesday, as Nigerians, in tweets and posts condemned the remarks by Ngige.

In tweets, posts and comments, Nigerians wondered upon what facts Ngige based his assertions.

Making reference to facts by the World Health Organisation (WHO), EiE Nigeria, tweeting @EiENigeria, argued that going by an estimated population of 180 million, and having just over 51,428 doctors, the nation’s medical personal had been overstretched.

“With 72,000 doctors to cater to about 180 million people in Nigeria, the medical personnel have been overstretched with many of them having little time for diagnosis.

“Brain drain had adversely affected the health sector as nine in 10 Nigerian doctors were actively seeking an opportunity to go abroad to practice,” the tweets read.

Reacting, spokesperson of former President Goodluck Jonathan, Reno Omokri, bemoaned Ngige’s arrogance, questioning if his statement of the nation having enough doctors was commensurate with the fact that President Buhari had spent over a year abroad seeking medical attention.

“What type of arrogance is this? We have enough doctors? Is that why your boss, President @Mbuhari, spent one year and 39 days abroad, including over six months in a UK clinic? This government is a punishment on the Nigerian people,” Omokri, @renoomokri, tweeted.

“Ngige’s claim that Nigeria has enough medical doctors is a lie that is too barren and naked. These people have reduced Nigeria to a caricature,” Nnadozie said.

Apparently vexed, another Nigerian with the twitter ID, King on the MIC, described Ngige’s statement as careless and unreasonable, wondering whether Ngige was happy that the nation’s best brains were being utilised abroad.

“Careless and unreasonable statement! While other countries are keeping their best brains, a minister is happy Nigeria’s best brains are being exported just bcuz he can afford to travel abroad for medical treatment. Shame on Dr Chris Ngige!,” King on the M.I.C, Proudly Nigerian, @Oluwaseunbams, tweeted.

For Onuigwe Chidi, @Chigold101, Ngige’s statement was shameful, adding that Nigeria did not have enough doctors.

Kelvin Odanz, @MrOdanz, on his part drew Ngige’s attention to a quote by the Minister of Health, Professor Isaac Adewole, that though the nation had about 70,000 registered doctors, more than 35,000 of them were not practising in Nigeria.

“There are about 70,000 registered doctors in Nigeria. More than 35,000 of them are not practising in Nigeria. They have left the country. This is from the minister of health himself. We have an emergency situation in our hands and the utterance of Chris Ngige is an embarrassment,” Odanz said.