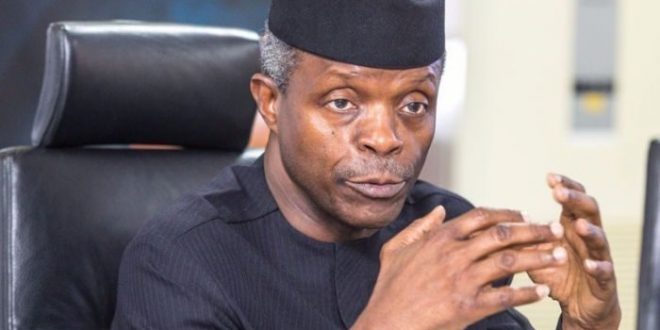 HOW NEC, NEWLY FORMED EAC WOULD WORK TOGETHER BY VP OSINBAJO

Idowu Hamed September 20, 2019 HEADLINE, NEWS Comments Off on HOW NEC, NEWLY FORMED EAC WOULD WORK TOGETHER BY VP OSINBAJO 67 Views

The Vice President of the Republic of Nigeria, Prof. Yemi Osinbajo has said that both National Economic Council (NEC) and Economic Advisory Committee (EAC) are for the benefits of President Muhammadu Buhari.

According to a release signed and made available to StarTrend Int’l & www.startrendinternational.com by Laolu Akande, Senior Special Assistant to the President on Media and Publicity, Prof. Osinbajo spoke at the 97th NEC meeting today at the Council Chambers, saying, “If NEC want to be briefed regularly by the Economic Advisory Council, EAC, we will request the President to do that,” the VP explained to the Council observing that such interaction will promote synergy.”

In response to a request for clarification by members of the National Economic Council regarding NEC’s relationship with the newly announced Economic Advisory Council, EAC, Vice President Yemi Osinbajo, SAN, has said both councils are for the benefit of the President.

Below are highlights of NEC deliberations:

UPDATE ON THE NATIONAL LIVESTOCK TRANSFORMATION PLAN BY THE GOVERNOR OF EBONYI STATE, DAVE UMAHI, CHAIRMAN OF NEC TECHNICAL COMMITTEE ON THE NLTP

The chairman reminded NEC that the Committee was to address the
Farmer/herder crisis
The Committee presented a National Livestock Transformation Plan 2019 – 2028.

The Plan is not targeted on only cows but a holistic strategy to address animal husbandry.

N100 billion has been budgeted to support the project.
FG is to contribute 80% in grant to support States, while States will contribute land, project implementation structure, personnel and 20% cost of the project.

Need to look at the Trans-Human West Africa Regional Protocol – because the country cannot allow such movement of cattles without registering and monitoring them
Council emphasised the need to established the fact that NLTP is a creation of NEC and State Governors and is completely distinct from RUGA.

NEC adopted the National Livestock Transformation Plan on January 18, 2019. It is a creation of the National Economic Council.
States will determine, whether or not they are willing to participate, as FG did not impose this plan. Participation remains voluntary.

The role of the FG is to coordinate, monitor and help implement the plan

UPDATE ON ACCOUNT
Honourable Minister of State for Budget and National Planning reported to Council that balances in the underlisted accounts as at 17th September, 2019 are as follows:

Council resolved that Governors should meet with the Ministry of Finance and Central Bank of Nigeria to sort out the details of repayment modalities and the Vice President will ensure same and ensure the meeting between the Governors, CBN and Finance Ministry in order to facilitate the speedy resolution of the matter.

That in the 2019 World Bank ease of doing business ranking, Nigeria is ranked 146 with Micro Small and Medium Enterprises (MSMEs) making up to 90% of Business in Nigeria.

That PEBEC is mandated to make Nigeria’s ranking to top 100 in the 2020 World Bank Doing Business index.

Achieve the required political buy-in across all arms and levels of government.

Furthermore, she told NEC that PEBEC has in the past 3 years achieved the following:

32 Nigerian states, led by Kaduna, Enugu, Abia, Lagos and Anambra states have improved in their ease of doing business environment.
An independent EODB survey adjudged Nigeria’s reforms as impactful in terms of reduction in time, cost and procedures of doing business.

-The 13 member Ad-Hoc Committee which is chaired by the Governor of Edo State, Mr. Godwin Obaseki in their report, told the Council that the Committee is constituted to address:
i. Impact of vandalism, oil theft and illegal bunkering on oil production;
ii. Effectiveness of the activities of the JTF and other Security Agencies
iii. Consider the set-up of Special Courts to prosecute offenders, among others.

The Terms of Reference of the Ad-Hoc Committee is to include:
· restoring and sustaining the three major pipelines;

· assessing the challenges and draw up a roadmap to guide further actions towards finding a lasting solution to the problem;

· co-opt individual or corporate body to facilitate the work of the Committee and update the Council regularly.

– The Ad-Hoc Committee in its findings discovered that there were losses. NNPC reported a loss of 22.64 million barrel of crude oil valued at USD 1.35 billion for 2019 half a year and possibly UDS 2.7 billion for a full year at a global oil price of USD 60 per barrel, if not checked.

– Absence of governance structure for the pipeline such that no one is held accountable whenever there is a breach on the lines.

– Slow and inadequate prosecution of oil thieves, despite numerous arrests and seizures.

– Huge internal and external markets of stolen crude oil which include Ghana as well as some neighboring countries.
-The Committee made the following recommendations to the Council:

i. The need to restructure the maintenance of all pipelines as a way of tackling the perpetrators of oil theft. ii. Have a legal framework that will ensure every criminal is duly prosecuted, imprisoned and all assets confiscated.

iii. Setting up Special Courts to try offenders, set-up of Legal Task Force to coordinate the prosecution of arrested offenders as well as train special judges to handle cases of oil theft.
iv. NNPC to engage the National Intelligence Agency (NIA) to identify markets for the stolen products.

v. Governors of the oil producing states to step up actions to develop their communities with their 13% derivation allocation as well as implement programmes that will be impactful to make life easy for the people. They should also create employment opportunities for the youths in these regions.
vi. Propose a funding arrangement to be jointly funded by the Federal, State Governments and oil companies.

Council resolve as follows:
Recommendations given will be presented to the President who is also the Minister of Petroleum for the final decision and implementation.
The Chairman of Council also asked NNPC to make a presentation to the Council on the state of PMS and smuggling across the borders.