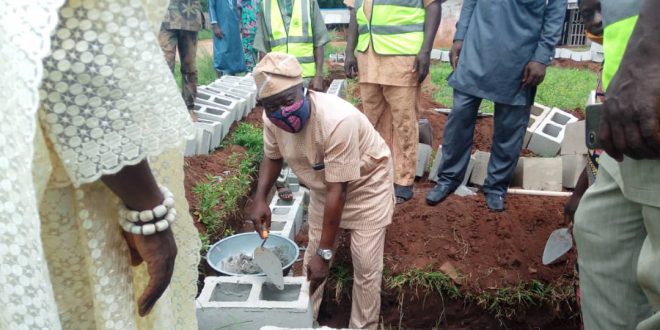 Alhaji Fagbenro laying the foundation of a 3 blocks of classroom

YEWA SOUTH LG: Transition Chairman of Yewa South Local Government in Ogun State, Alhaji Ramon Olabode Fagbenro has assured citizens of the council area of his administration commitment to provision of infrastructure that would make life meaningful for them.

Alhaji Fagbenro who gave the assurance while laying foundation of a block of three (3) classrooms at Baptist Day Primary School, Oke-Odan in Yewa South Local Government pointed out that, lack of enough classrooms which has resulted to congestion of students in a class was the main reason that spured authority of the council to embarked on the project.

He assured that the three classroom project would be completed in a shot time while promising that such gesture would soon be extended to other schools within the council area.

According to the council boss, “what informed the project was congestion of pupils in a classroom. As we can see, the school does not have enough classrooms to accommodate the students. So, there

is urgent need to build more classrooms for convenience of the pupils and their teachers.

“By the grace of God, within few weeks the project will be completed and I want to assure other schools that are expecting similar project that we shall get to them. It is one after the other, we cannot do everything at the same time, but hopefully we shall get to them,” he said.

Commending the transition Chairman for the good effort at upgrading the school, the Oloke-Odan of Oke-Odan, Oba (Dr.) Oluwarotimi Oluremi Fagbenro pointed out that, people of the town have been expecting government to come to the aids of the school for over fifteen years, saying that the step taking by the council Chairman was significant at advancing the educational development of the town.

The monarch however implored pupils of the school and their teachers to make good use of the building when completed while advising the pupils to use the opportunity to concentrate on their studies.

“We pray that God will help us to complete the project because our resources are limited and I also pray that after the completion, the teachers and the students will make good use of it”.

Appreciating the State Governor, Prince Dapo Abiodun and the council Chairman, the Head Teacher of the school, Mrs. Babarinde Cecilia Oyedoyin said that, the gesture would motivate the teachers in the school to do more while the students would be very happy and at a long run give the school the opportunity to admit more students.

She prayed that God would continue to bless the State Governor, the council boss and his team, and grant them more wisdom to lead the state right.

After the foundation laying event, the Chairman and his team inspected the ongoing clearing of heap of refuse site within Owode-Yewa market and drainage system along Owode/Ilaro road.

Alhaji Fagbenro assured the traders in the market  that immediately after the clearing of the refuse within the market, the authority of the council would allocate the land to interested market men and women, with a view to stop people from further dumping of refuse in the area.