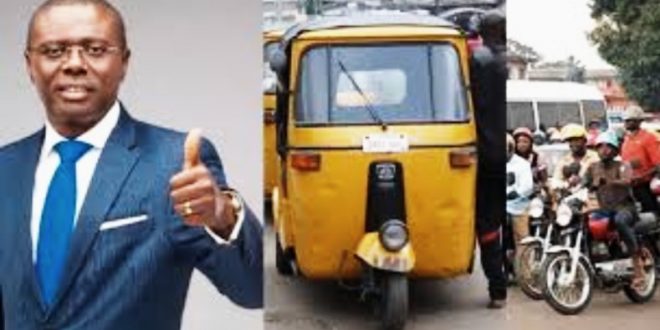 LAGOS: it is no longer news that the Lagos State Government has  from February 1, 2020 banned the activities of commercial motorcycles, fondly called Okada, and Keke Napep or Marwa, in some Local Government Areas, bridges, and highways in the state, but according to observers of the scene, the ban will seriously affects the poor masses in the state.

According to a vox pox conducted by StarTrend Int’l in some affected areas in the state, the residents were of the opinion that the ban will seriously affected the socio-economic of people in those areas affected.

The residents agreed with the government on the nefarious activities and the danger the alternative transportation system has caused residents of the state, majority who have died untimely, while others are crippled, but they were of the opinion that the authority should think deeply about the poor masses that are conditioned to patronize these means of transport.

When asked what they want the government to do to cushion the effect of the ban, an elderly man who wants to remain anonymous opined that the ban firstly affects the school children, minority of them that live in remote areas of the state, but attend schools in faraway to their areas.

Others interviewed who also spoke in the same however called on the government to provide alternative transportation system that will, most importantly cushioned effects of the ban on the numerous school children that their parents live in remote areas of the state.

Recalled, the Commissioner for Information and Strategy, Mr Gbenga Omotoso, on Monday, January 27, 2020 announced the ban at the State House in Alausa, saying the measures were taken by the Government in response to “scary figures” of fatal accidents recorded from operations of Okada and tricycles in the State between 2016 and 2019.

His words, “After a robust assessment of the debate on what has been widely referred to as the motorcycle (Okada) and tricycle (Keke) menace, the Lagos State Government and the State Security Council have decided that the security and safety of lives of Lagosians are paramount.

“The figures are scary. From 2016 to 2019, there were over 10,000 accidents recorded at the General Hospitals alone. This number excludes unreported cases and those recorded by other hospitals. The total number of deaths from reported cases is over 600 as of date.

“Also, the rate of crimes aided by Okada and Keke keeps rising. They are also used as getaway means by criminals. Therefore, after consultations with stakeholders, the State Security Council, in compliance with the extant Transport Sector Reform Law 2018, has decided to commence enforcement of the law which bans the operation of Okada and Keke in six Local Government Areas and nine Local Council Development Areas”.

The State Government however directed security operatives to embark on total enforcement of the State’s Transport Sector Reform Law of 2018 on the affected six Local Government Areas, nine Local Council Development Areas and 10 major highways across the State with effect from February 1.

According to the Commissioner, operations of Okada and Keke NAPEP have been banned in the following LGAs and LCDAs: Apapa LGA, Apapa Iganmu LCDA, Lagos Mainland LGA, Yaba LCDA, Surulere LGA, Itire-Ikate LCDA, and Coker-Aguda LCDA.