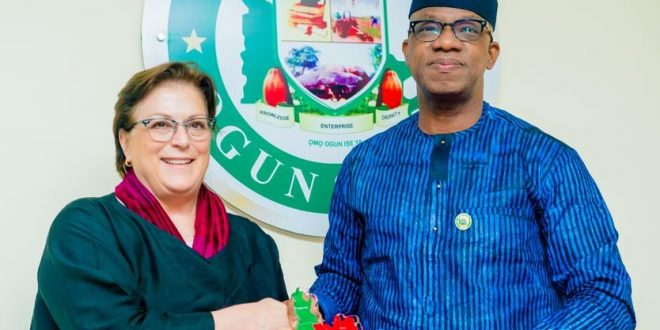 US To Partner Ogun On Infrastructure, Agric, ICT – Consul General

By AbuSatar Hamed
ABEOKUTA: The United States of America Consul General to Nigeria, Claire Pienangelo, has lauded the Ogun State Government for providing a level playing ground for both local and foreign investors to thrive in the State.

According to a press release e-signed and made available to StarTrend Int’l magazine & www.startrendinternational.com by S.F. Ojo, SA Media to the Governor, Pienangelo also promised to help bring American investors to do business in the State.

The Consul General stated in an interview after a meeting with the State Governor, Prince Dapo Abiodun in his office at Oke-Mosan, Abeokuta, commended the State for having “a good attitude”, by welcoming both foreign and local investors with open arms.

According to the Consul General, ” though it is a bit difficult for foreign investors to operate in the country, but I think Ogun State has a good attitude by welcoming foreign and local companies and providing a level playing ground. I think this is the first step in attracting foreign firms, especially, American firms”.

She said her coming to the State was to look at areas where American companies would cooperate, noting that the State was blessed with potentials that would be explored to the benefit of the people.

Her words, “This is my first visit to Ogun State to look at what is going on economically, politically and in security spheres. Today (Tuesday, January 28, 2020) with the Governor, we have had a wonderful discussion about what are the opportunities in terms of education, commercial development, agriculture and other areas that I hope we will come back to provide some cooperation and business interest.

“I think Ogun State has a lot of potentials and we will like to find greater areas of cooperation. Ogun State provides a lot of great promise in poultry, soya beans, corn and all the areas that we can grow the economy. We are interested in bringing back our commercial and agricultural teams to look at what is happening in agriculture and other sectors”.

While rating the State high in the area of infrastructural development, the Consul General said American companies would be interested in road construction, maintenance of equipment as well as in the energy sector by providing generators and other forms of equipment that would assist in the continuous industrial development of the State.

Also speaking in an interview, the State Commissioner for Commerce, Investment and Trade, Mrs. Kikelomo Longe, said the Consul General has identified agriculture, infrastructure and Information and Communication Technology (ICT) as possible areas for American investors.

She said the Americans were interested on how to enhance and enrich feed mills using soya beans and how to help the local farmers improve their yield to guarantee food security in the State, adding that their competent, experience and know-how would go a long way in supporting the infrastructural drive of the State.

“There are quite a number of American companies that are interested in infrastructure. They have the competence, experience and know-how to support infrastructure in the State”, the Commissioner explained.

Mrs. Longe noted that the State has established and planned to establish more Techhubs in various parts of the State, expressed the hope that foreign, including American companies, would support the State by training and enhancing skills among the youth thereby making them employable.

“Ogun State has established and planned to establish more Techhubs in different part of the State. The Americans are interested in how they can partner with us to employ some of those who are trained in this HUB and help us in capacity building. They are interesting in creating jobs and empowering our youths”, she said.