We’ll Restore Water In The Next Few Days – Abiodun 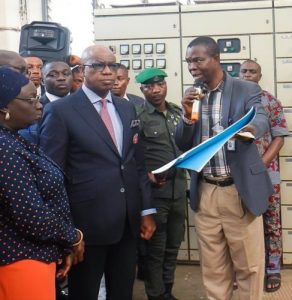 ABEOKUTA: In its quest to ensure that water supply in Abeokuta and ita environs is drastically improved upon, the Ogun State Government says that it is poised to restore water supply to about 7,000 homes in the next few days.

According to a press release e-signed and made availabile to StarTrend Int’l magazine & www.startrendinternational.com by S.F. Ojo, SA Ogun Media, the Ogun State Governor, Prince Dapo Abiodun who made this known while on an assessment tour of the Ogun State Water Project in Arakanga, Abeokuta North Local Government Area of the State, noted that the supply when restored to the 7,000 homes, would translate to much more than that in terms of people, assuring that as soon as the transformer is restored, an additional 15,000 homes would have water supply restored to their various homes in the next few days.

Abiodun also disclosed that his administration has immediately intervened with the Ogun Osun River Basin Development Authority (OORBDA) to release some water to the Corporation, adding that he has also called on the Ibadan Electricity Distribution Company to restore power supply to the Corporation.

His words, “I have immediately intervened with the Ogun Osun River Basin Development Authority to release some water to the Corporation because during periods like these, water level is so low and they need the intervention of the Authority. They have nicely obliged us, and they’ve started pumping water since yesterday.

Abiodun also decried the state of non-visible investments at the Corporation in the last fifteen years, noting that his administration would look at the entire scheme, engage necessary consultants on the way forward.

The General Manager, Ogun State Water Corporation, Engr. Oluseye Olugbenga Maku in his response appreciated the Governor for taking his time to check the facility to see first hand its needs, saying that the intervention of the State Governor would go a long way in alleviating the suffering of the people.