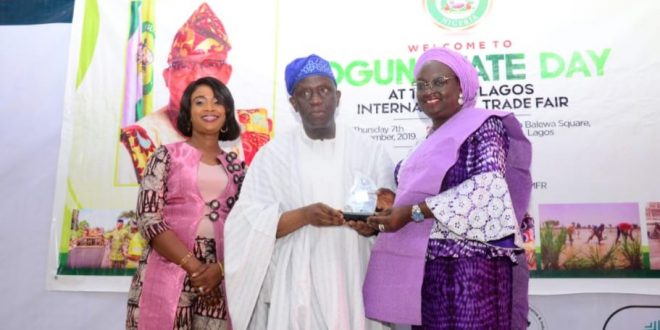 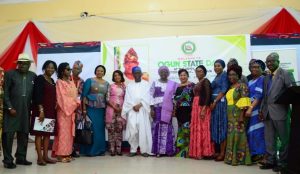 Ogun State Governor, Prince Dapo Abiodun has said that his administration would continue to initiate business friendly policies, programmes and provide conducive environment for the industrial development of the State.

Governor Abiodun who disclosed this during the Ogun State Day at the 2019 edition of the Lagos International Trade Fair, held at Tafawa Balewa Square, Onikan, Lagos, said his government was committed to the promotion of a private sector driven economy.

Represented by his Deputy, Engr. Noimot Salako-Oyedele, the governor stressed that his government had resolved to provide necessary infrastructure and conducive ambience for industries and businesses to thrive, noting that the recent closure of the international land borders was a blessing in disguise, aimed at fortifying indigenous investments and businesses against foreign business influence.

“We have established Ogun State Enterprise Development Agency which was to strengthen the Micro, Small and Medium Enterprises (MSMEs), embarked on massive reconstruction of rural roads, rehabilitation of alternative routes linking major roads in the State, to aid movement of goods and services, and also launched “Oko’wo Dapo”, a micro credit scheme that provides access to financial resources for grassroots women’’, he said.

Expressing support for urgent diversification of the Nigerian economy, the Governor said diversifying into the non-oil sectors has become imperative to enable the country to effectively utilise its abundant human and natural resources to improve investment in indigenous businesses.

He however, renewed the call for investors to partner with the State in the building the future together agenda, assuring that they would find Ogun State, a worthy partner.

In her goodwill message, the Consultant to Governor on Commerce and Industry, Ms. Sola Arobieke pointed out that the establishment of an Enterprise Development Agency by the Dapo Abiodun led government was to facilitate the growth and development of MSMEs towards promoting, developing and enhancing competitiveness.

Arobieke added that government also introduced significant reforms and programmes, with the creation of “Ease of doing business” Committee which would transit to the Business Environment Council, to reduce and ultimately remove constraints affecting smooth operations of businesses in the State.

Earlier in his welcome address, the President of Lagos Chamber of Commerce and Industry (LCCI), Mr. Babatunde Ruwase commended Ogun State for being a consistent and worthy partner in the past 32 years, noting that over the years, the International Trade Fair has maintained its position as the biggest fair in West Africa and Africa at large.

Ruwase added that the fair has been a strong platform for state governments to engage investors to promote business partnerships, noting that the efforts of Ogun State government at promoting business opportunities cannot be over-emphasized, describing the State as the most industrially developed in Nigeria.

He applauded the launch of Ogun Tech Hub, Oko’wo Dapo scheme and other initiatives targeted at improving the prosperity of the people.