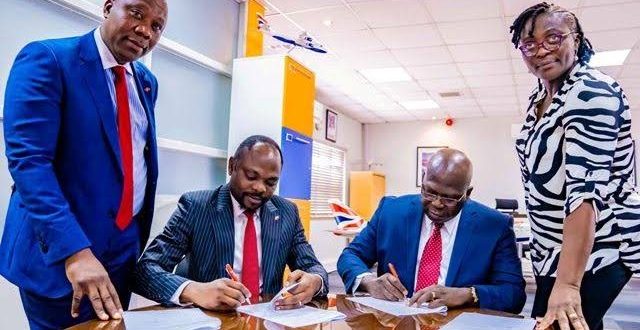 LAGOS: United Bank for Africa Plc. (UBA),  Pan African financial institution, and the global airline, British Airways have announced a collaboration to reward loyal customers who are cardholders of the Bank.

The promo which will last for six months from November 2019, will witness UBA customers getting significant discounts when they purchase their British Airways tickets using their UBA cards.

According to the Bank, the promo will allow customers to enjoy up between 10% to 15% discount on any ticket purchased during the campaign. The ticket fares is exclusive of taxes as is applicable to purchases of all goods and services.

The collaboration is aimed at increasing customer experience and satisfaction for both UBA Cardholders and customers of British Airways.

According to Mr Muyiwa Akinyemi, the General Manager, Corporate Bank, UBA Directorate, who expressed delight at the collaboration, noted that the promo between the two organisations was carefully thought out to ensure that loyal customers of the two institutions are duly rewarded, while ensuring that they also receive more value for their money. He added that for persons without a UBA account, all they require to benefit from this promo is to procure a card instantly from any UBA branch nationwide.

Akinyemi said: “UBA is excited to collaborate with one of the foremost Airlines in the world to run a promotion aimed at rewarding our cardholders and premium customers who will enjoy discounted tickets and other ancillary benefits such as loyalty points on the British Airways Executive Club.”

He further explained that as a customer-centric institution, UBA is always on the look-out for services and reward schemes that will ultimately benefit the customers, in line with its Customer 1st policy.

Akinyemi noted that the bank has plans to partner with other airlines in future to provide further opportunities of reducing cost of travel for its customers. “For now, we are partnering with a pre-eminent airline that offers class and distinction,” he said.

The Commercial Manager for British Airways in West Africa, Mr Kola Olayinka, noted that the airline is pleased to partner with the bank due to its huge customer base and wide reach, adding that with the partnership, more customers will be able to enjoy the promo.

He said, “British Airways is excited to partner with UBA, Africa’s Global Bank, to create a mind-blowing promotion aimed at raising awareness about this service to be rendered by both institutions.”

Continuing, Kola said, “In addition, the discounts provided by British Airways will reduce the cost of travel and encourage the Bank’s customers to make more foreign trips during the period and also reward their customers and staff as a way of giving them something very tangible.”

UBA was incorporated in Nigeria as a limited liability company after taking over the assets of the British and French Bank Limited who had been operating in Nigeria since 1949. The United Bank for Africa merged with Standard Trust Bank in 2005 and from a single country operation founded in 1949 in Nigeria – Africa’s largest economy – UBA has become one of the leading providers of banking and other financial services on the African continent.

The Bank which was awarded the Best Digital Bank in Africa by the Euromoney awards in 2018, provides services to over 17 million customers globally, through one of the most diverse service channels in sub-Saharan Africa, with over 1,000 branches and customer touch points and robust online and mobile banking platforms.

The shares of UBA are publicly traded on the Nigerian Stock Exchange and the Bank has a well-diversified shareholder base, which includes foreign and local institutional investors, as well as individual shareholders.

British Airways (BA), established is the flag carrier Airline of the United Kingdom with its headquarters in London. It is the second largest Airline in the United Kingdom with a fleet size of 278 aircraft and 183 destinations. Its parent company is the world’s third largest airline group, the International Airlines Group (IAG), a result of the merger between BA and Iberia in 2011. The Airline is a member of the Oneworld Alliance.