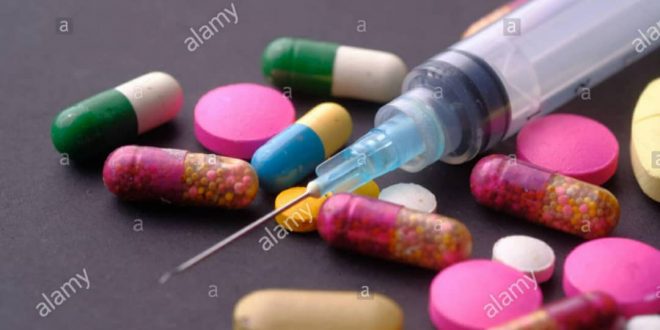 Drugs, according to Wikipedia, are referred to as substances that cause a change in an organism’s physiology or psychology when consumed.

They are typically distinguished from food and substances that provide nutritional support.

Consumption of drugs can be via inhalation, injection, smoking, ingestion, and absorption via a patch on the skin, or dissolution under the tongue.

In pharmacology, a drug is a chemical substance, typically of known structure, which, when administered to a living organism, produces a biological effect. A pharmaceutical drug, also called a medication or medicine, is a chemical substance used to treat, cure, prevent, or diagnose a disease or to promote well-being.

Traditionally, drugs were obtained through extraction from medicinal plants, but more recently also by organic synthesis.

However, in a report by News Medical Life Sciences, Drug abuse or substance abuse refers to the use of certain chemicals for the purpose of creating pleasurable effects on the brain.

There are over 190 million drug users around the world and the problem has been increasing at alarming rates, especially among young-adults under the age of 30. Apart from the long-term damage of drug abuse to the body, drug addicts who use needles are also at risk of contracting HIV and hepatitis B and C infections.

The causes of drug abuse, especially among youths have become worrisome, today, drugs are used by people for various reasons which may include: curiosity and peer pressure, for recreational purposes to obtain creative inspiration amongst others.

Basically, marijuana and hashish are the most widely abused drugs in the world. No fewer than 141 million people worldwide consume cannabis. The use of stimulants such as amphetamine and ecstasy is also widely reported with nearly 30 million people found abusing these drugs.

Cocaine is used by about 13 million people across the globe, with the highest number of users in the United States. Abuse of heroin and other opioids are less common than other drugs but being taken by about 8 million people worldwide, mainly in South-East and South-West Asia and Europe.

As a matter of fact, drug abuse is seen in various age groups and in individuals from all walks of life. However, recent findings showed that more men are prone to drug than women, while single people are more likely prone to it than married individuals. Urban dwellers are more exposed to drugs than rural dwellers as well as prisoners, street children and younger individuals are more at risk of drug abuse due to their contact to free society and care free wellbeing.

Records showed that Drug abuse is inflicting immeasurable harm on public health and safety around the world on yearly basis and threatening the peaceful coexistence and socio economic development of many societies.

The effects of drug abuse on humans are drastic, apart from the fact it can hurt the people who indulge in them, people around are not safe also. Drug abuse have adverse effect on people ‘s bodies system and could also lead to permanent brain damage as well as wastage of lives of future leaders in our society if there are no urgent government’s action in place to curb it’s high rising damage.

Consequently, this year’s International Day Against Drug Abuse and Illicit Trafficking themed”, Better knowledge for better care” is a United Nations International Day against drug abuse and the illegal drug trade. It is observed annually on 26 June, since 1989 to commemorate Lin Zexu’s dismantling of the opium trade in Humen, Guangdong, ending in June 25 1839, just before the First Opium War in China.

The observance was instituted by General Assembly Resolution 42/112 of 7 December 1987.

In Nigeria, The National Agency for Food and Drug Administration and Control (NAFDAC) is a federal agency under the Federal Ministry of Health, responsible for regulating and controlling the manufacture, importation, exportation, advertisement, distribution, sale and use of food, drugs, cosmetics, medical devices, chemicals and packaged water in Nigeria.

Governor Dapo Abiodun emphasised on this at a forum organised by Nigeria Drug Law Enforcement Agency of Nigeria (NDLEA), Idiroko Command. Represented by his Deputy, Engr. Noimot Salako-Oyedele urged Parents, as first teachers, to instil in their children, good values and show good example. The School and drug enforcement agencies must also complement these efforts by educating youths and the public at large on the dangers and consequences of drug abuse and drug addiction.

Different Fora must be created as avenues for information dissemination and for interaction between the public and the stakeholders in the fight against drug abuse, drug addiction and drug trafficking.

Traditional rulers, civil society organisations, religious leaders, professional bodies and the media must also join in fighting the menace of drug abuse and illicit drug trafficking by educating the youths, being good role models and reporting suspected cases to the appropriate authorities for intervention.

The Office of the Wife of the Governor, Ministries of Health and Women Affairs and Social Development are not left out in their various massive campaigns and sensitization against illicit drug usage.

Other security agencies should not leave the fight to NDLEA alone, rather they should collaborate and strengthen their partnership, intensify their collaborative efforts in the areas of intelligence exchange and other support services.

Religious bodies must continue to engage open dialogue on drug abuse, mobilise worshippers as advocates for global response to fight the menace.

Faith-based organisations can also be of great support in the prevention and care in the dissemination of information in local languages, these materials can be developed locally or obtained from sources, such as the Ministries of Health, NGOs and faith-based networks. Religious leaders can help to issue press statements and grant interviews in the media (newspaper, radio and television) on the adverse effect of drug abuse.

Educational Institutions especially the Tertiary ones should encourage students’ forms where they will pledge not to use drugs or alcohol on campuses as well as putting in place a team that will work with law enforcement agents to get the message across among other mentoring programs. 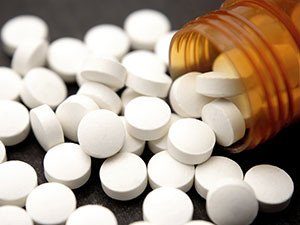 As the world celebrates International Day Against Drug Abuse and Illicit trafficking, this brings to the open the great challenges the world is facing concerning global drug abuse and how it’s better knowledge will foster greater international cooperation for countering its impact on health, governance and security.

Besides, more concerted efforts must be put in place to save the future of promising youths who believe in the power of drugs through sensitisation and enlightenment campaign programmes, youth empowerment and creation of gainful employment.

*Oluwaseun Boye is an Information Officer with the Ogun State Ministry of Information and she writes via oluwaseunboye@gmail.com

Publisher and Editor in Chief - Magazine and Online Tel: 08038525526 - 08023339764 - 08055657329 Email: startrendinter@gmail.com
Previous WE CAN NOT LOSE FOCUS TO CHEAP BLACKMAIL AND DISTRACTION – OHANAEZE INDIGBO
Next Mama Diaspora Praises FG’s N-Power Initiative As ECAPI Honours Her With Grand Matron