The shareholders of the pan-African financial institution, the United Bank for Africa (UBA) Plc applauded the Board, Management and Staff at the 55th Annual General Meeting of the Bank, held in Lagos on Friday April, 7, 2017.
UBA shareholders approved the payment of N19.9 billion as final dividend for the financial year ended 31st December 2016, in addition to N7.3 billion interim dividend paid after the audit of its 2016 Half Year Results.
The shareholders, who unanimously approved the N0.55/share final dividend on every ordinary share of N0.50 each, were particularly impressed by the new Group Managing Director/CEO, Mr. Kennedy Uzoka, who delivered unprecedented results to shareholders at his inaugural AGM.
UBA had earlier paid an interim dividend of N0.20/share to shareholders, bringing the total dividend for the 2016 financial year to N0.75kobo, an impressive 25% growth over the total dividend of N0.60/share paid for the 2015 financial year. Furthermore, the total dividend of N0.75/share translates to an unparalleled yield of 14.3% when put in the perspective of UBA’s share price of N5.26 on the Nigerian Stock Exchange, as at the close of market on Friday, April 07, 2017.
The Shareholders were excited at the sterling performance of the Group, an impressive 22% year-on-year growth in gross earnings and an outstanding 32% year-on-year growth in profit to N91 billion, in what analysts described as an attestation to UBA’s resilience and enhanced productivity.
Worthy of note to the shareholders is the contribution from the Group’s African subsidiaries, emphasizing its earnings diversification, across geographies which reduce the Group’s vulnerability to macroeconomic pressures in any single market. The Group’s ex-Nigeria subsidiaries contributed 32% of the Group’s profit in 2016, compared to a quarter of profit contribution in the 2015 financial year.
Notwithstanding the challenging operating environment, the Group recorded an impressive 22% growth in gross earnings to N384 billion in 2016, from N315 billion in the 2015 financial year, illustrating the Bank’s resilience and tenacity to generate earnings even in periods of economic slowdown.
The Group further achieved a significant 32 percent growth in profit before tax to N91 billion, compared to N68 billion profits recorded over the same period of 2015. UBA’s profit after tax grew by 22 percent to N72 billion, from N60 billion recorded the previous year.
President of the Association for the Advancement of the Rights of Nigerian Shareholders, Alhaji Farouk Umar, said at the AGM, “It is obvious from the faces of shareholders that all of us are happy with the performance of the bank. We did not expect anything less because we know that that our chairman is an achiever not only locally but also internationally. We have seen the African expansion and its contribution to our earnings and I believe this is also commendable.”
The Group Chairman, UBA Plc, Mr. Tony Elumelu, gave credit to the chairpersons of UBA subsidiary Boards across Africa saying ‘‘these hard working men and women, who chair the Boards across our businesses in Africa, have helped contribute a third of the overall profit of the Group. I believe they deserve commendation. They are strengthening UBA brand across Africa, in line with our aspiration.”
He was particularly pleased with the Bank’s new CEO, Kennedy Uzoka. ‘At the Board level, we are extremely pleased by the financial performance that Kennedy and his team delivered in 2016. Kennedy and his team prioritize the Customer and they are diligently executing the Customer First project, which the Board believes will sustainably enhance the performance of the Group’ said Elumelu.
“Our results show the tenacity and enterprise of our Management team and Staff. More importantly is our ability to proactively meet customers’ need. I am pleased that UBA maintains some of the best prudential ratios in the industry, as our capital adequacy ratio of 20% and 39% liquidity ratio are well above the 15% and 30% regulatory requirement respectively. We will be prudent in lending to critical growth sectors of the African economies, as we remain upbeat on the huge banking opportunities in Africa’, he added.
He also used the occasion to commend the Federal Government of Nigeria and Central Bank of Nigeria on their concerted policy actions aimed at reflating the Nigerian economy. ‘I will like to encourage them to continue along this path, which I believe willstimulate the country’s economy in the shortest possible time’.
The Group CEO, Kennedy Uzoka assured the shareholders of a better 2017, saying, “As we further our Customer First Philosophy, we are approaching 2017 with stronger optimism, especially as the outlook remains positive in most of our markets. We are not unaware of the macro economic challenges, competition and constantly changing customer preferences. Rather, we believe we are well equipped to win in the market. 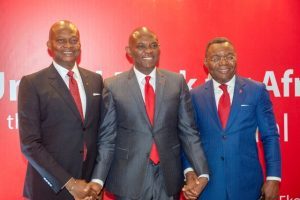 ‘‘We will further sweat our unique Pan- African platform to improve productivity, extract efficiency gains and grow our share of customers’ wallet across all business lines and markets. We will continue to build on our strong governance culture, zero-tolerance for infractions and transparency in furthering our frontiers of leadership in the African market.’’
United Bank for Africa Plc (UBA) is a leading pan-African financial services group with presence in 19 African countries, as well as the United Kingdom, the United States of America and France.
UBA was incorporated in Nigeria as a limited liability company after taking over the assets of the British and French Bank Limited who had been operating in Nigeria since 1949. The United Bank for Africa merged with Standard Trust Bank in 2005 and from a single country operation founded in 1949 in Nigeria – Africa’s largest economy.
The Bank has become one of the top providers of banking and other financial services on the African continent. The bank provides services to about 14 million customers globally, through one of the most diverse service channels in sub-Saharan Africa with over 1,000 branches and customer touch points and a robust online and mobile banking platform.
UBA was the first Nigerian bank to make an Initial Public Offering (IPO), following its listing on the NSE in1970. It was also the first Nigerian bank to issue Global Depository Receipts (GDRs). The shares of UBA are publicly traded on the Nigerian Stock Exchange (NSE) and the bank has a well-diversified shareholder base which includes foreign and local institutional investors, as well as individual shareholders.