Breaking News
Home / HEADLINE / TB Joshua Says, If We Persecute Ourselves, Why Will Others Not Behead Us?, Frowns Against Division In Church 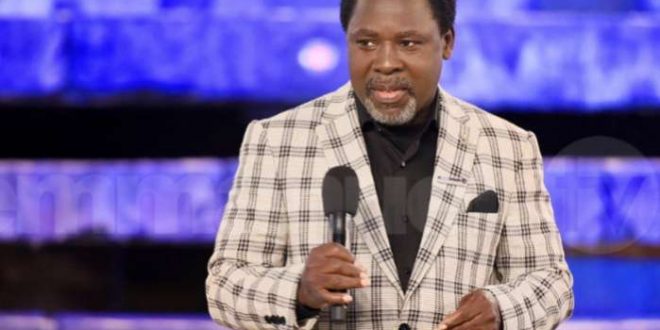 TB Joshua Says, If We Persecute Ourselves, Why Will Others Not Behead Us?, Frowns Against Division In Church

Idowu Hamed February 4, 2020 HEADLINE, NEWS, RELIGION Comments Off on TB Joshua Says, If We Persecute Ourselves, Why Will Others Not Behead Us?, Frowns Against Division In Church 196 Views

LAGOS: The founder of The Synagogue, Church Of All Nations (SCOAN), Prophet TB Joshua has frowned on the ongoing divisions in the Nigeria churches while he called for urgent unity amongst the breathren, while denouncing the levels of division and hypocrisy often found within the church.

Speaking through Evangelist Angela, a SCOAN Evangelist from America at the church service on Sunday, February 2, 2020, during a heartfelt sermon titled, ‘The New Wave Of Persecution’ Prophet Joshua said Christian should come together and speech with one voice on issues affecting them.

Angela bemoaned how it is common for churches to be divided by human attributes such as colour, denomination or political belief.

“If pastors and priests cannot walk together as one, how will their members walk together,” she sombrely questioned.

Exposing hypocritical tendencies, she equally commented: “We do not seem to mind the faith of the President or the wealthy before we wine and dine with them – while we keep persecuting ourselves and causing division in the body of Christ”.

Using the example of the tragic building incident that occurred at The SCOAN on September 12, 2014 which resulted in the loss of over 100 lives, she shockingly revealed that no Christian body in Nigeria sent a message of support or condolence to Joshua.

“I personally received a phone call in the office from the Sultan of Sokoto, the Head of the Nigerian Muslim community, and other Emirs and Islamic leaders – registering their concern and support – but not a call came from Christian leaders here. How? Why? We persecute ourselves. Why will others not persecute us?”

In contrast, Angela explained when an incident of equally terrible proportions happened in Saudi Arabia – a stampede during the Hajj resulting in the deaths of countless Muslim pilgrims – messages of solidarity were given by different Christian bodies in Nigeria.

“Look at your words. Look at your hands. If you find yourself still grasping the weapons of persecution, this is your opportunity to lay them down,” she stated.

While sharing her own testimony, Angela revealed she had a crippling disability which American doctors had concluded would leave her wheelchair-bound and result in a premature death.
However, when she saw a video from The SCOAN at a local church service in California, US, she resolved to visit the Nigerian church where she received prayer from Prophet Joshua.

“I have outlived my expiry date by 11 years and counting,” she told congregations, saying she was “healed, whole and free” after receiving prayer from the Nigerian cleric.

However, the American Evangelist revealed that despite her life-changing testimony, she was queried by her fellow believers as to why she visited Nigeria and specifically Prophet TB Joshua for prayers.

“Because it didn’t happen in your church or your country does not mean it should not happen,” she told congregants and Emmanuel TV viewers.

The Evangelist called on Christians to stop focusing on the names of the churches they attended, stressing that “names are only symbolic” and “Jesus is the Head of the church”.

Angela stressed that the increase in physical persecution towards the Christian community – such as the tragic beheading of the Adamawa State CAN Chairman, Rev Lawan Andimi, by Boko Haram greatlt calls for unity, not division in the Christiandom.

Frowns Against Division In Church# If We Persecute Ourselves TB Joshua Says Why Will Others Not Behead Us? 2020-02-04
Idowu Hamed

Tags Frowns Against Division In Church# If We Persecute Ourselves TB Joshua Says Why Will Others Not Behead Us?

Publisher and Editor in Chief - Magazine and Online Tel: 08038525526 - 08023339764 - 08055657329 Email: startrendinter@gmail.com
Previous Ogun Ready For Overflow Of Lagos – Abiodun
Next Pastor Adeboye Says, Every Soul Lost Is Precious To God Whether Christian Or Muslim, Prays For Restoration Of Nigeria