Breaking News
Home / HEADLINE / Pastor Adeboye Says, Every Soul Lost Is Precious To God Whether Christian Or Muslim, Prays For Restoration Of Nigeria 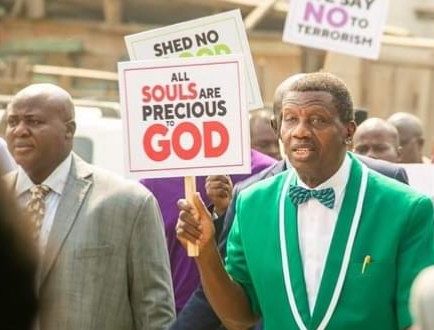 Pastor Adeboye and others in a spiritual rally, recently.

Pastor Adeboye Says, Every Soul Lost Is Precious To God Whether Christian Or Muslim, Prays For Restoration Of Nigeria

Idowu Hamed February 4, 2020 HEADLINE, NEWS, RELIGION Comments Off on Pastor Adeboye Says, Every Soul Lost Is Precious To God Whether Christian Or Muslim, Prays For Restoration Of Nigeria 40 Views

LAGOS: Pastor Enoch Adeboye, the General Overseer of The Redeemed Christian Church of God, has posited that every soul lost to insurgency is precious to God whether a Christian or a Muslim.

Adeboye, who stated this on Sunday, February 2, 2020 during the monthly Thanksgiving Service at the church’s National Headquarters in Ebute Metta, Lagos State, stated that he would lead members of the church on a prayer walk from Ebute Meta to Atan Cemetery in Yaba metropolis and back.

“Every soul is precious to God whether a Christian or a Muslim. Father, we declare no more death of the innocent in Nigeria.

The cleric prayed that God uproots all the sponsors of terrorism in Nigeria.

He said, “It is written that if my people who are called by my name can humble themselves and call on me, I will heal their land” making reference to 2 Chronicles 7:14.

Adeboye lamented that some countries now ban Nigerians from coming into their territories as he prayed for the restoration of the nation.

He preached briefly on ‘Songs of Victory’ with text from Psalm 18:1-3 after which he led the congregation on the prayer walk.

The Christian Association of Nigeria had declared a three-day fasting and prayer beginning from January 31, 2020, to empower the government and military forces to conquer the fight against terrorism and the spate of killings in the country.

According to, Mr. Samson Ayokunle, the CAN President the spiritual exercise ended on February 2, 2020 with a prayer walk.

Publisher and Editor in Chief - Magazine and Online Tel: 08038525526 - 08023339764 - 08055657329 Email: startrendinter@gmail.com
Previous TB Joshua Says, If We Persecute Ourselves, Why Will Others Not Behead Us?, Frowns Against Division In Church
Next How UBA Revamps NextGen Account With Premium Offerings, Partners DRB LasGidi; Attracts Zero Charge On All Transactions