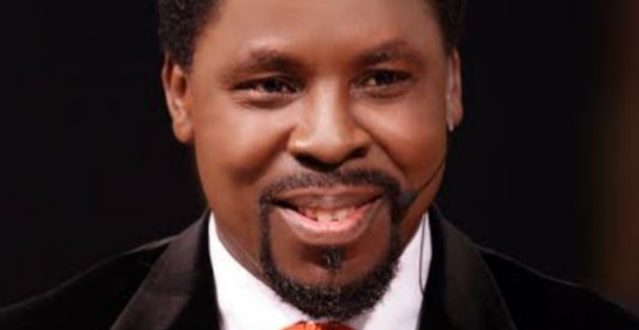 TB Joshua: Prophet Never Honoured At Home, From East And West They Come

Let me confess upfront that I am one of those Nigerians who doesn’t honour this prophet. But let me also state that I don’t count one bit. His mega church in the dingy Ikotun-Egbe suburb of Lagos mainland is always filled to the brim anyways – most times with more foreigners and whites in attendance than Nigerians.

Prophet Temitope Balogun Joshua, founder of the Synagogue Church of All Nations (SCOAN) has his mass of followers mainly from South America, South Africa, East and Central Africa. You would think he cast a spell on them.

He also has in utter thralldom many Presidents of African countries who probably believe he’s the awaited Messiah. They include Presidents of Liberia, Tanzania, Malawi, among others. Many of them worship in SCOAN’s Headquarters in Lagos.

When a wing of the posh guest house in the Synagogue collapsed in 2014, over 80 South Africans were among the 115 fatalities. But that hasn’t made a dent on TB Joshua or the sprawling holy ground of the Synagogue.

SCOAN AS NIGERIA’S MECCA:
On a trip to China two years ago, a group of about 50 passengers were members of the Synagogue. How did I know? They were in uniform and they all had on their chest, the badge bearing the head of the Prophet in the Synagogue.

They were from Tanzania perhaps and they acted as if they were from a pilgrimage to heaven. They kind of looked at us Nigerians in the plane with a mixture of pity and disdain. These fellas don’t know what they have, they ought to be living in the Synagogue if they knew what is good for them. They disembarked in Ethiopia.

On my return journey, another batch of over 50, perhaps from Malawi this time, connected from Ethiopia to Lagos. Badges, uniform and all the appurtenance of the Synagogue, including the we-are-heaven-bound attitude.

I was to learn later that Prophet Joshua is probably responsible for over 50% of the tourism business in Nigeria. The much imposing SCOAN headquarters had become a global religious monument. SCOAN has also lifted it’s seedy Ikotun neighbourhood into an economic hub. Hotels have sprung up and many houses in its vicinity have been upgraded and converted to lodges.

One would expect that the Lagos State Government would be moved by the surge of foreign visitors to fix the roads and give the Ikotun-Egbe some face lift. But our leadership of this age is much too dim…

THE BOY FROM MANCHESTER UNITED:
Apart from the fact that Prophet TB Joshua was 57 years on June 12, 2020, my interest in him has been kindled once again by the recent report of the visit to the Synagogue by a teenager from Manchester.

According to the report (see illustration), 16-year-old Angel Gomez, a recently promoted first team player of Manchester United (yes, same Man. U), was at Ikotun-Egbe home of the Synagogue.

The young lad who was captain of the junior team said in a video that he had been struggling with injuries, that was what brought him to see the Prophet. His parents had been followers of The Prophet so they advised him to seek the healing touch of the Man in the Synagogue.

But Synagogue had for long, actually been the playground of numerous top footballers and other celebrities.

Kanu Nwankwo was there; Ogenyi Onazi was there, among others. The visit of the young Manchester boy may open a floodgates of Premier League players repairing to the holy land in Ikotun.

WHAT MAKES THIS PROPHET TICK?:
As editor of NEWAGE newspaper thereabouts 2004, I had interviewed TB Joshua in his Ikotun coven before he turned it into the gilted haven it is now.

My reporter and I were on edge, being taken through the labyrinthine tunnels of Synagogue to TB Joshua’s office.

It was then a small clustered office that was barely enough to sit the three of us. At a time when his fame was on the upward spiral and he was feuding with many Nigerian televangelists who accused him of being full of vile and much sorcery, he appeared simple and very ordinary. His words were mundane and his bearing plebeian.

He was just constructing the monstrously large headquarters and guesthouses. He took us on site tour. He told us that he had in mind a five-star lodge for his foreign guests. They wouldn’t need to lodge in Sheraton and have to shuttle, he explained. He had a bakery, water factory, press and recording studio in the facility.

He handed us numerous tapes; he made us sit through a deliverance session. So many South Americans were in the huge crowd even then.

People felled wholeheartedly as if they were being electrocuted. They were being rid of dark, malevolent spirits. I didn’t see, I wasn’t moved, but they insisted the spirit was moving in their midst.

His detractors said he got his powers from the bracken-filled stream that separates Ikotun from Ejigbo where he started in a dank shed. His chief opponent, Pastor Chris Okotie insisted TB was of the devil.

A MAN OF PEACE, CONFOUNDING HIS DETRACTORS:
But the man in the Synagogue has confounded his detractors. He continues to win followers, especially from abroad; his crusades would fill the biggest stadium in South America; he is said to be worth over $10 billion, and he is indeed, far larger than Nigerians could ever imagine.

One point to note though is that he seems a man of immense peace. He appears to have much too much to do than to have time for anything else. He simply faces his front, not minding his critics or even the government. His critics must have been weary of trying to call him out.

Just as in early 2000 when I chatted with him, I still have no opinion either way than to say that the ways of God are most confounding!