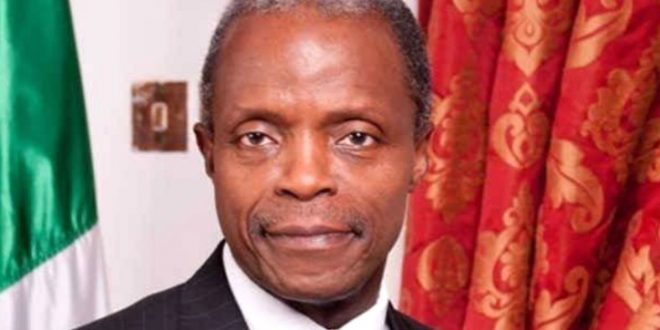 ABUJA – Vice President Yemi Osinbajo, SAN has urged the United States to lend its weight to the call for a just global transition to zero emissions, lead the effort to ensure easy access to COVID-19 vaccine by all countries, and generally reset its foreign policy agenda with the African continent in ways that bring about economic prosperity, increased security, and improved governance.

According to a release e-signed and made available to StarTrend Int’l & online – www.startrendinternational.com by Laolu Akande, Senior Special Assistant to the President on Media & Publicity, Office of the Vice President, Osinbajo expressed these views on Monday, April 19, 2021 in a speech delivered virtually at the 2021 Johns Hopkins University’s African Studies Programme Conference on the theme “Africa-US Re-engagement: A New Foreign Policy Agenda”. The conference was organized by the School of Advanced International Studies (SAIS), of the university.

According to the VP, “the United States and Africa should work together to tackle climate change and moderate global warming including through an energy transition from fossil fuels to renewable energies. African countries have made commitments in this regard towards implementing the Paris Climate Change Agreement targets.”

“Given the long term commitment to net-zero emissions by 2050, there is a growing trend among development finance institutions to withdraw from fossil fuel investment, including the World Bank’s decision to cease funding for upstream oil and gas development and the new restrictions on financing downstream gas development currently being considered by the European Union, the United Kingdom of Great Britain and Northern Ireland, and the United States.

“While well-intentioned, this move does not take into account the principles of common but differentiated responsibility and leaving no one behind, that are enshrined into global treaties around sustainable development and climate action.”

“The United States must lend its weight to stopping this manifestly unfair trend that can undermine the sense of collective responsibility we all have towards mitigating climate change. What is required is a just transition to zero emissions,” the Vice President added.

Prof. Osinbajo has in recent times advocated for a just transition to net-zero emissions, particularly calling on multilateral agencies, and western countries to stop the planned defunding of gas projects in developing countries.

At different national and international forums, including recent meetings with a delegation of the European Union (EU), and at the Africa Regional Heads of Government Commonwealth Roundtable, among others, Prof. Osinbajo had maintained a firm stand against ending investments in gas projects in developing countries during the transition to zero emissions.

Commending the US for helping to improve healthcare outcomes in Africa including through the President’s Emergency Plan for AIDs Relief (PEPFAR), Prof. Osinbajo called for “the same spirit of collaboration with regard to making COVID-19 vaccines available to African countries.”

His words: “the COVID-19 pandemic has shown the need to coordinate actions to prevent and tackle pandemics while also building up public health infrastructure in developed and developing countries alike.

“This is not a time for vaccine nationalism and export bans but rather of working together towards universal vaccination against the disease. The United States can lead in the effort to ensure that all countries and their peoples can access vaccines irrespective of the resources available to them.”

Calling on the US to reset its foreign policy agenda with Africa, Prof. Osinbajo noted that the reviewed cooperation with the continent “should promote a partnership that brings about economic prosperity, increases security, combats disease, improves governance and mitigates climate change.”

“Africa is in many ways the last frontier for economic development and it has the potential to be a global growth pole. Indeed, as other parts of the world are looking inwards, Africa is moving confidently to integrate its economies through the African Union Agenda 2063 as well as the establishment of the African Continental Free Trade Area (AfCFTA),” the Vice President added.

Speaking specifically about the implementation of AfCFTA, the Vice President said “the United States is well placed to lead trade and investment ties with Africa. And it has a good leg-in with the African Growth and Opportunities Act (AGOA). The legislation, which removed all tariffs on 6,400 products available for export to the US, saw some African countries benefiting considerably.”

Continuing Prof. Osinbajo noted that “as the African Continental Free Trade Agreements are set to kick-in, AGOA must now be implemented consistent with the AFCTA. AGOA expires in 2025. But a new and improved AGOA that takes these challenges into account can be negotiated before then.”

On improving the support of the US in combating terrorism in the Sahel region, the Vice President said a more robust intervention towards clearing the reign of terror in the region is desirable.

“The escalation of the attacks and the synergies being created amongst these extremist groups call for a review of that position. It may be the moment for a more robust intervention along the lines of US-backed operations in clearing terrorists and insurgents in the Middle East.”

The Vice President also strongly advocated that the US-Africa relations need not be uni-dimensional, noting that “since the United States is also a global leader in economic and military terms as well as through its contributions to the norms that shape the global order, it should work with Africa either under the auspices of the African Union or indeed through individual countries like Nigeria to build a better world.”

“Africa should not be seen or used as a pawn in great power games nor as an arena in the contest to secure strategic minerals and natural resources but rather as a partner in building a more secure, peaceful and prosperous world,” Prof. Osinbajo added.

Before his speech, organizers of the conference commended the VP for his leadership and commitment, expressing delight, according to Prof Elliot Cohen, Dean of the School of Advanced International Studies, that a professor rose to the height of a Vice President in any country at all.

Also, Prof. Peter Lewis, the Chair of African Studies in the university described the Vice President as “a figure known for his integrity, dedication, and effectiveness.”

After his speech, the Vice President also took questions from conference participants.