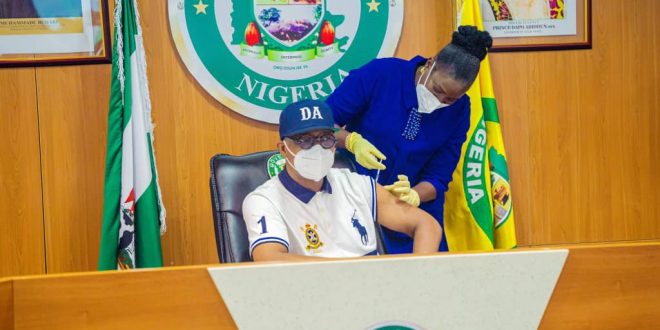 ABEOKUTA – The Ogun State Government has revealed that over 59,000 residents have been vaccinated in the first phase of the COVID-19 campaign exercise.

Executive Secretary, Primary Health Care Board, Dr. Elijah Ogunsola made this known in an interview with OGIS correspondent in Abeokuta, noting that the State is set to administer the second dose to healthcare workers, strategic leaders and other frontline workers who had received the first shot.

“Presently in Ogun State, over 59,000 people comprising of health workers, strategic leaders and other frontline workers have been administered with COVID-19 vaccines, in accordance with the directive of the National Primary Health Care Development Agency”, he said.

Ogunsola who said that the State is strategic in administering the vaccines, added that it did not go beyond stipulated 10 days vaccination period, noting that it had followed strictly the distribution guidelines.

He said the State was able to allay the fears of people through vaccination of policy makers such as the Governor, his Deputy, Paramount rulers and Obas, former Governors, as well as the Nobel laureate, Professor Wole Soyinka, among others.

Executive Secretary, Primary Health Care Board, enjoined residents that had taken the first dose to keep their vaccination cards as evidence for the second dose, while assuring that residents who are 50 years and above and those with underlining ailment such as high blood pressure, diabetes, and so on would be programmed to receive their jabs in the second phase of the campaign.