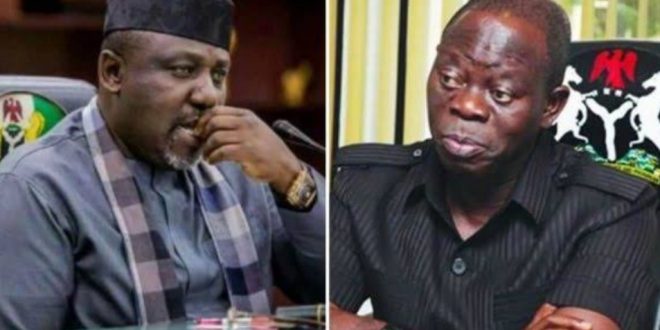 Oshiomhole Allegedly Pushes Okorocha Out Of His Office

Idowu Hamed May 13, 2019 HEADLINE, POLITICS Comments Off on Oshiomhole Allegedly Pushes Okorocha Out Of His Office 58 Views

Embattled Governor of Imo State, Owelle Rochas Okorocha, has revealed how the National Chairman of the ruling All Progressives Congress (APC), Comrade Adams Oshiomhole, pushed him out of his office when he went to the party’s National Secretariat in Abuja in his quest to actualise his ambition of becoming the Senator for Imo West.

Okorocha, whose Certificate of Return was withheld by the Independent National Electoral Commission (INEC) after the Returning Officer for the election claimed that he was forced to announce the Governor as winner so as to save his life, made the revelation this weekend during an interview with select editors in Abuja.

After complaining bitterly about how Oshiomhole has been treating him, Okorcha was asked: “If by chance you meet Adams Oshiomhole today, what will you tell him?”

He replied thus: “We will chat as usual. What will I do to him? The last time I saw Oshiomhole was when I went to Oshiomhole’s office and he sent his State Security Service man to insult me in his office, before the governorship candidate of Akwa Ibom, the NDDC guy who also reacted against the gentleman. An SSS was pushing me out as a governor from his office. So, I’ve taken enough of insults from Oshiomhole and all those that are planning this evil.”

Lamenting his ordeal, Okorocha, who has petitioned and sued INEC, insisted that there was no justification for the travails he is being subjected to by both the leadership of APC and INEC.
Source News Express

Tags Oshiomhole Allegedly Pushes Okorocha Out Of His Office#