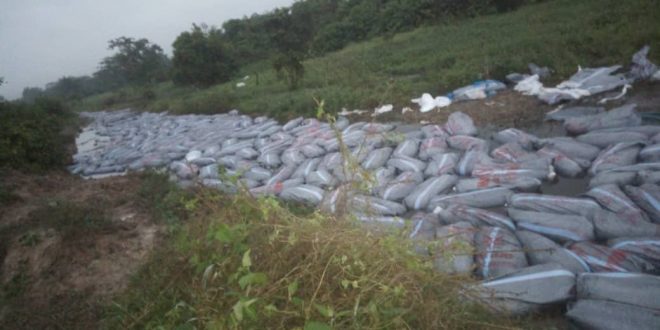 In a release e-signed and made available to StarTrend Int’l magazine & www.startrendinternational.com by Dyke Ogbonnaya, State Public Relations Executive, on behalf of the State Commandant, on getting to the spot, it was discovered that over 300 sacks of premium motor spirit (PMS) with a volume of approximately 100 litres for each sack was lying afloat along the water surface.

The team also recovered a White Ford Bus with Lagos number plate: KTU 607-XK also laced with several 50 litres of PMS which was abandoned by the vandals now at large.

According to the State Commandant, Mr. Hammed Abodunrin, a distress call received by the special Anti-Vandal unit of the Ogun NSCDC and their prompt response made way for this intervention and abortion of the crime by the would-be vandals.

While addressing newsmen during an on the spot assessment at the crime scene, the State Commandant reiterated the willingness of the Corps to

maintain a 24-hour monitoring and surveillance of the NNPC Right of Way in Ogun State warning unrepentant vandals to steer clear of the pipelines to avoid facing the full wrath of the law.

Meanwhile, investigation is still on-going to trace the perpetrators of this untoward act.

Abodunrin reiterated the need for all to be vigilant and watchful while also advising the vandals to be mindful of the whole stretch of the NNPC pipelines across the State.