Breaking News
Home / HEADLINE / Wike Tells Uzodinma, “Edo Boys Are Waiting For You, Make Sure You Cover Your Face With Mask While Coming” 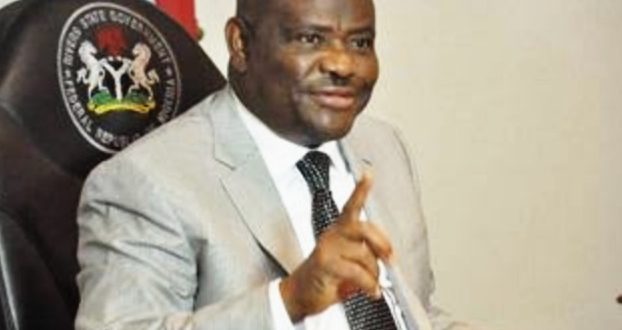 Wike Tells Uzodinma, “Edo Boys Are Waiting For You, Make Sure You Cover Your Face With Mask While Coming”

Idowu Hamed July 10, 2020 HEADLINE, NEWS Comments Off on Wike Tells Uzodinma, “Edo Boys Are Waiting For You, Make Sure You Cover Your Face With Mask While Coming” 40 Views

RIVERS STATE: Rivers State Governor, Nyesom Wike has replied Gov. Hope Uzodinma of Imo State over his recent speech where he boasted that the All Progressive Party (APC) led government will teach the People’s Democratic Party (PDP) and Gov Nyesom Wike on how to do a transparent election in the forthcoming Edo State gubernatorial election.

Uzodinma had earlier boasted to Gov Wike that Nigerians trusted the APC party because of their transparency in running the affairs of the country and the people of Edo are committed in voting for Pastor Ize Iyamu of the APC.

However, Gov Wike in reiteration responded to Hope Uzodinma that when Governors are talking, someone who came 4th in an election and was fraudulently made a Governor overnight shouldn’t talk.

According to him, “If I am Hope Uzodinma, i will not come out where people will see me, I will be hiding myself and be walking mostly in the night, where people will not see me, honestly. But it’s unfortunate he has no shame at all.

“He is bragging of showing me and the PDP how to do a transparent election in the forthcoming Edo governorship election. Let me remind him that Edo boys are waiting for him. He should not forget to wear a mask that will cover the whole of his face because anywhere they see him near Edo State, they will show him how to deal with a fraudster and a 419ner.”

“APC is the only political party in the whole of Africa where you will see men with questionable characters. Go through their APC Edo election committee, all the people there are all men with dubious character. Check Hope Uzodinma, Ganduje, Yahaya Bello and others, you will know that these political party doesn’t mean well for Nigerians.

“Ever since APC made him governor, because he was made not democratically elected by the people of Imo State, the only problem Hope Uzodinma has in Nigeria today is Nyesom Wike.”

He stated further, “During his court case with the democratically elected governor of Imo State, His Excellency, Rt Hon Emeka Ihedioha, Hope Uzodinma keep carrying my name everywhere. Even after he was made governor by his APC cabals he keeps having my name on his lips. Now Edo governorship election is fast approaching, still Hope Uzodinma a well known fraudster in the Nigerian Political system still wouldn’t drop my name off his lips.

“Both him and Ganduje of Kano the Babariga dollar governor should not forget to wear face masks that will cover their faces because Edo boys will show the world the difference between a democratically elected governor Godwin Obaseki and unelected supreme court governor Hope Uzodinma and a governor who collects bribe and hide it in his Babariga pocket, that is why anywhere you see him, he only wears Babariga in case if there’s any ill gotten dollar to share”.