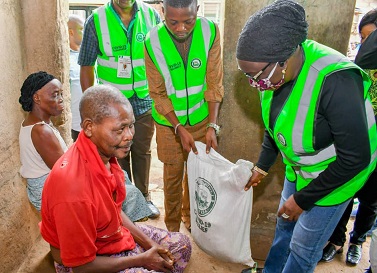 ADO-ODO/OTA LG: Ogun State Deputy Governor, Engr. Noimot Salako-Oyedele has frowned at the poor level of compliance by some residents of Ado Odo Ota Local Government  Area of the  state during the first day of lockdown as part of measures to combat the spread of Coronavirus pandemic in the State.

According to a press release e-signed and made available to StarTrend Int’l magazine & www.startrendinternational.com by Boye Oluwaseun, Head, Media, Ogun Deputy Governor’s Office,  Engr. Salako-Oyedele who expressed dissatisfaction during an on the spot assessment to Ado-Odo/Ota and Yewa South Local Government Councils of the State, said food banks set up by the State Government  were to assist the poor and the vulnerable to cushion the effect during the period of lockdown and for easy distribution of stimulus package to residents of the areas.

She warned that government would not spare anyone caught violating the lockdown and distribution of the relief packages rules.

“On the violators, I have  met with Ota Area Commander on my way and let me reiterate that the law must be obeyed and nobody would be spared. We will also continue to engage our law enforcement agencies to make sure that they support us to be able to achieve our mission. I also call on individuals to self-police themselves” she stated.

The Deputy Governor added that though it may not be convenient for people to stay at home for long, she  however urged residents to respect state government directives for their own good, noting that the community spread of the disease was increasing on a daily basis, hence anyone who has it and move around others, is capable of infecting more people.

“Neither for voters nor everybody, but the relief packages are meant for those that would suffer untold hardship as a result of the lockdown. Government has also set up committees in each Local Government area that would identify the targeted citizens”.