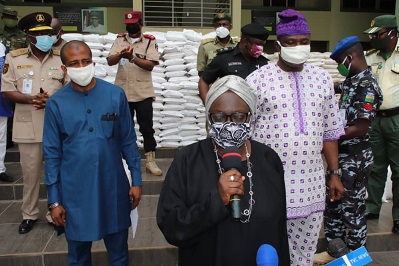 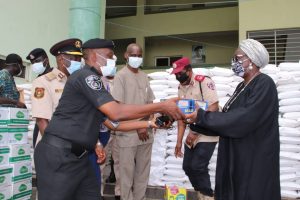 ABEOKUTA: Towards appreciating efforts of the security personnel during the lockdown, as well as mitigate its negative effect on their families, Ogun State Government has donated some relief items to them, with a thumbs up on effective security management since the commencement of the stay at home order in the State.
According to a press release e-signed and made available to StarTrend Int’l magazine & www.startrendinternational.com by Oluwaseun Boye, Press Officer, Office of the Deputy Governor, the Deputy Governor, Engr. Noimot Salako-Oyedele while donating the food items on behalf of the State Government, said the security forces in the State were also family men, who have to deal, not only with their professional part, but also support their families at all times.
She said, immediately the lockdown commenced, the Governor, Prince Dapo Abiodun held a meeting with all the security chiefs on how best to manage the situation in the State, noting that within the period of lockdown, the State  had encountered several challenges, which  were well managed by the security forces.
Her words, “At the beginning, we do give them some cash to be able to support their officers who were on special assignments, but 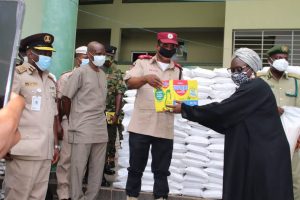 today, we are now giving palliative food items to support them as well, and this will go to everybody, not just the police on the frontline, but to every officer in all barracks across the state.
“We have here, about 15 different agencies represented – the Police, Army, Customs, Immigration, TRACE, NDLEA, Civil Defence, DSS, So-Safe Corps and others; so this is all encompassing relief package.

“We have given 4000 bags of rice, 4000 bags of garri, 4000 bags of millet, 4000 bags of maize, seasoning cubes, sanitisers, detergents and sanitary towels for their wives”.
Earlier in his welcome address, the Special Adviser to the Governor on Security, AIG Olusola Subair (rtd), said the State government was passionate about the welfare of Officers and men of security agencies, noting that the relief materials were extended to them as a show of appreciation.
In his remarks, the State Commissioner of Police, Mr. Kenneth Ebrimson appreciated Governor Abiodun for extending the palliatives to the police and other security agencies to cushion the effects of the lockdown on them, saying it came in at the appropriate time. 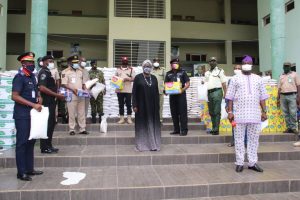 He assured that the palliatives would be adequately shared, so that everyone could have a feel and be rejuvenated at this trying period.
Giving a vote of  thanks on behalf of Service Chiefs and security  agencies in the State, State Commander, National Security and Civil Defence Corp (NSCDC), Commandant Ahmed Abodunrin, appreciated the state government for being people friendly, noting that  the palliative measures would aid them to re-double their efforts at ensuring the safety of lives and property.