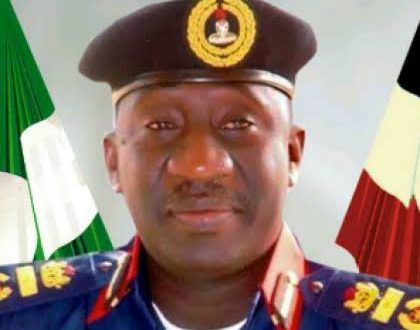 No Gun For Covid- 19 Assignment, NSCDC CG Orders As Corps Reaches Out To Vulnerable In Ogun, Appreciates State Government 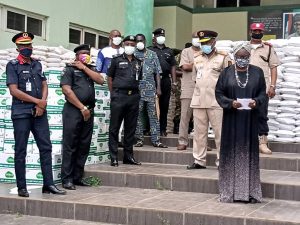 ABEOKUTA: Officers and men of the Nigeria Security and Civil Defence Corps (NSCDC) have been charged to do everything possible to ensure public safety and security in this challenging period.

They were specifically enjoined to extend the “Defend the Defenceless” motto of the corps beyond rhetoric by practically helping people in the course of their various national assignments.

According to a press release e-signed on behalf of the NCSDC State Commandant and made available to StarTrend Int’l magazine & www.startrendinternational.com by Dyke Ogbonnaya, State Public Relations Executive, this admonition given by the Commandant

General of the Corps, Alhaji Abdulahi Gana Muhammadu was delivered on Wednesday, April 29, 2020 by the Ogun State Commandant, Hammed Abodunrin while flagging off the “Each One, Feed One” programme of the command.

Abodunrin said the CG had directed that all Operations concerning COVID-19 must be done with due humility and respect for human rights.

He explained further that vulnerable members of the public deserve help and that such assistance should be unconditionally rendered as part of Civil Defence mandates.

Abodunrin said officers and men of the corps have voluntarily contributed some tokens to also support some vulnerable persons especially the aged in line with the CG’s desire to always assist the public.

His words, “The Commandant General is humane. Even when there was no emergency, he has always been in the forefront of assisting people irrespective of whether they are his personnel or members of the public.

“You will recall that during the World Civil Defence Day, he offered scholarships in form of books and other learning aids to some secondary school children. Voluntarily taking a token from what we have to give out is in appreciation of his good work while fulfilling the core mandate of rescuing vulnerable population”.

The State Commandant further said that, “On behalf of the Corps Commandant General, we wishe to sincerely appreciate the Ogun 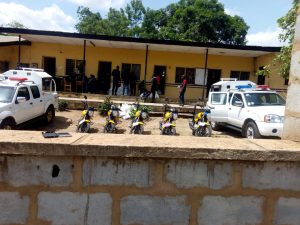 State Government under the able leadership of His Excellency, Prince Dapo Abiodun (MFR), the Executive Governor, Ogun State for the unprecedented gesture of two Hilux vans and five motorcycles for the  operational efficiency of the Corps in the State and for also extending palliative materials to the State Command during this lockdown period.

“The Corps promises to always give its very best even with this morale booster from the State Government.”