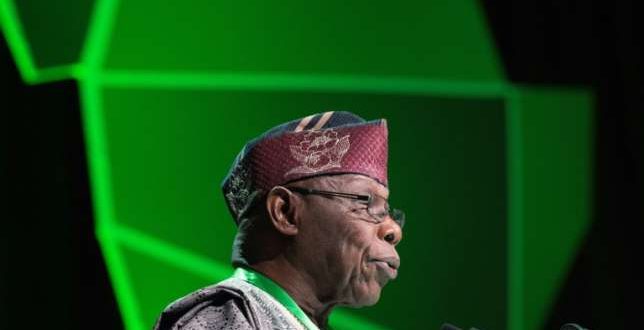 Former president, Olusegun Obasanjo, has warned Nigerians against allowing people he called ‘hooligans in politics’ to get into power as it is detrimental to the country’s democracy.
He said this while speaking at the book launch of another former president, Goodluck Jonathan, titled “My Transition Hours”, in Abuja on Tuesday, November 20, 2018.
He said, political power can be dangerous in the hands of politicians who are not democrats.
His words; “When all is said and done, there’s still no substitute for democracy. It fosters peace and not conflict; it builds and does not destroy; it unifies rather than divide. But all these can only happen if democracy is found as an instrument in the hands of democrats.
“If it is in the hand of those that I call ‘hips’, hooligans in politics, it can be a dangerous weapon. So, we must avoid hooligans to have access to this beautiful weapon because they can abuse and misuse it.”
The book launch was also attended by former Heads of State, Yakubu Gowon and Abdulsalami Abubakar, as well as former vice president, Atiku Abubakar.
Others include Senate President, Bukola Saraki; chairman of the People’s Democratic Party (PDP), Uche Secondus; chairman of the All Progressives Congress (APC), Adams Oshiomhole; Senator Godswill Akpabio and many more.
“Goodluck Jonathan is a good man and when the history of democracy in Africa is written, his name will be etched in gold,” he said.
Jonathan lost the election to Buhari by more than 2.5 million votes, the first time an incumbent lost a presidential election to an opposition candidate in Nigeria. He conceded defeat to Buhari in a phone call before the Independent National Electoral Commission (INEC) officially announced the former military Head of State the winner of the election.