Breaking News
Home / HEADLINE / NIGERIANS ARE UNBREAKABLE, DO NOT HATE EACH OTHER – OSINBAJO 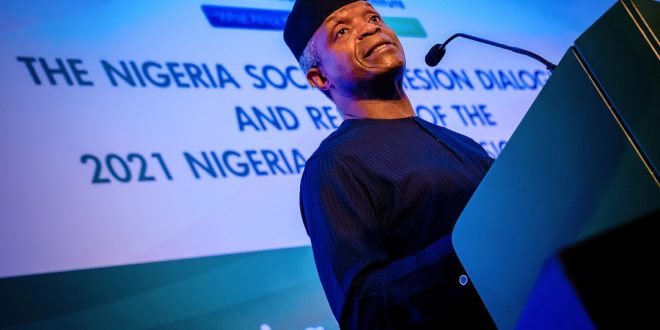 NIGERIANS ARE UNBREAKABLE, DO NOT HATE EACH OTHER – OSINBAJO

Idowu Hamed August 26, 2021 HEADLINE, NEWS Comments Off on NIGERIANS ARE UNBREAKABLE, DO NOT HATE EACH OTHER – OSINBAJO 11 Views 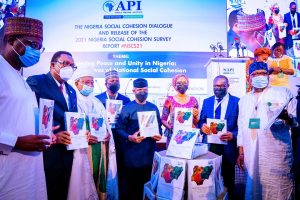 …Classification Of Indigenes, Non-Indigenes Is Apartheid

…Criminals Are Not Representatives Of Ethnic, Religious Groups

ABUJA – Despite the activities of those with divisive agenda, Nigeria will prevail over her tribulations due to the resilience, faith, hope and strength of its people, according to Vice President Yemi Osinbajo, SAN.

According to a release e-signed and made available to StarTrend Int’l & online – www.startrendinternational.com by Laolu Akande, Senior Special Assistant to the President on Media & Publicity, Office of the Vice President, Osinbajo stated this on Thursday, August 26, 2021 at the National Social Cohesion Dialogue organized by the Africa Polling Institute, which held at the Shehu Musa Yar’Adua Centre, Abuja.

Describing Nigerians as “an unbreakable people”, the VP emphasized the shared interests of Nigerians across different facets of life, noting that Nigeria’s diversity can be used to drive further economic growth.

He explained, “And in the face of the challenges confronting us, we must remind ourselves of certain truths. The first is that our present challenges are neither unique nor exceptional. Various nations at various points in their histories underwent similar tribulations. It is within our power to address these issues and emerge from them even stronger as a people.

“Despite the divisive rhetoric of demagogues and the utterances of those who profit from disharmony, Nigerians do not hate each other. Every day, millions of Nigerians of different ethnicities and creeds comingle, make common cause and forge friendships across our fabled fault lines. While we have our share of such acrimony, the situation does not support the narrative that we are a nation of fragments condemned to be perpetually at each other’s throats.

“What matters is how committed we are to the constructive management of diversity and the peaceful resolution of such conflict. This is where we can and should certainly work much harder.”

Advocating for unity despite sundry differences, the VP warned against “polarising identity politics”.

He said, “the truth is that Nigeria has evolved beyond the sort of easy balkanization that is proposed by some separatists. Politicians who continue to traffic in division and discord are behind the times and have failed to take note of how much more integrated our society has become.”

Noting that the fair, swift and equitable dispensation of justice to address both everyday grievances and long-suffered wrongs is essential for fostering social cohesion, the Vice President added that, “we must strengthen institutions which at every level can deliver justice, inclusion and mutual security.” 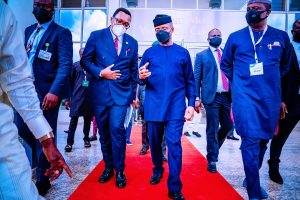 According to the Vice President, “an abiding feature of being a Nigerian is our optimism… Our capacity for hope is a creative optimism… Every day, millions of our people armed with their faith, skills, determination and wits take their destinies into their hands, working hard to forge a better life for themselves and their families.

“Nigerians of this ilk are everywhere repairing, healing, building, trading and doing business. They believe that tomorrow will yield a greater harvest than that of today and that as long as they have breath in them they can change their material conditions. It is this capacity for hope that makes us resilient in the face of incredible odds and even in the teeth of adversity. This is who we are as a people and it is why I believe that we will prevail over today’s tribulations.”

Speaking further on the need for unity and cohesion, Prof. Osinbajo said, “In many quarters, there are feelings of alienation and exclusion. To this point, we must recognize the ways in which we perpetuate institutional discrimination and cause people to see their identities as weapons for procuring opportunity, often at the expense of others.

“We see this whenever Nigerians are denied opportunity on the basis of their state of origin or because they are “non- indigenes.” We see it when a Nigerian that has been resident in a state all his life is suddenly excluded from admission into an educational institution or an employment opportunity because he is not considered an “indigene.”

According to the VP, “All Nigerians have a constitutional right to live, work and enjoy their lives in peace and safety under the law. The classification of Nigerians as “indigenes” and “non-indigenes” is a form of apartheid and contradicts our declared aspirations towards equality and unity.

“Our Constitution enjoins Government to “secure full residence rights for every citizen in all parts of the Federation” and this is an imperative that we must commit to across all tiers of Government. All that should matter in evaluating ourselves is where we live and fulfill our civic obligations.

“This is why when we launched our Social Investment Programmes, the eligible beneficiaries were selected based on their states of residence and none was discriminated against on any basis. This was in keeping with the idea that the only true path to national progress lies in broadening access to opportunity for all Nigerians without qualification.

“Our destinies have become so interlinked as to be inseparable. This is why this administration is investing heavily in transportation infrastructure – road, rail, sea and river ports – to reduce the distances between our people and link localities to markets and enable trade, travel and tourism. 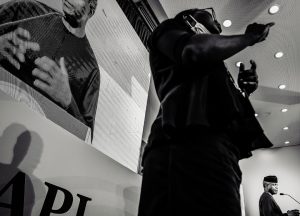 “Our constitution guarantees a full portfolio of civil liberties and it is the responsibility of Government at all levels to give life to these provisions. For example, states should as a matter of deliberate policy ensure that the freedom of worship and provide spaces in which citizens can lawfully erect places of worship.”

The VP further noted that even as the Federal Government continues to ramp up efforts in tackling the nation’s security challenges, a united citizenry would further help, especially in local policing strategies.

He said, “as we address the challenge of insecurity and the profusion of threats to public safety, we are increasingly turning to multilevel policing strategies that are consonant with our federal architecture. It is important that the localized security mechanisms being established by subnational authorities are constituted in an inclusive manner and reflect the true diversity of those that live in local communities. No truly sustainable security umbrella can be built on the basis of exclusion.”

According to the Vice President, criminal elements should not be generalized as representation of ethnic or religious groups.

However, he noted that, “we must ensure that we see it for what it is – a criminal act which must be punished according to the law and not an ethnic conflict. Criminals must not be seen or treated as anything other than criminals and certainly not as representatives of any ethnic or religious group.

“We will not defeat crime by dividing ourselves. We can only overcome it by uniting against our common enemy – the criminals who terrorize our people.”

The Vice President further said that nation-building was hard work and an inter-generational endeavour.

He urged that all Nigerians “must renew the social contract and deepen the meaning and durability of our citizenship.”

The Vice President further highlighted the significance of unity in diversity in driving economic and social inclusion, stating that “Nigeria has what it takes to operate favourably in this world.”

The VP added, “Nigeria will be a great loser if we were to break up; when we see the greatest economic advantage to our size about to come to life. In short, staying together as a collective affords each of our communities far more opportunities for prosperity than they would have if they went their separate ways. We have all that it takes to be truly more than the sum of our parts.

“It is our responsibility to harness and consolidate these assets for the common good of all Nigerians. We will continue to work hard to create an umbrella of inclusive prosperity over our people. This is the defining task of our generation.” 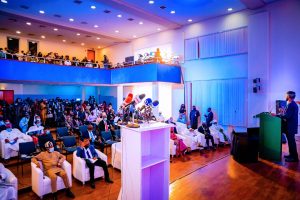 He also highlighted examples that showed the power of unity over division, including that of 83-year-old Islamic cleric, Mallam Abdullahi Abubakar, who saved the lives of hundreds of Christians from terrorists in Barkin Ladi, Plateau State in 2018; as well as the reported ethnic conflict between Hausas and Yorubas in Shasha market, Ibadan, in 2021, where the VP stated that “members of both groups protected and shielded each other from harm.”

“Our resilience as a nation owes a great deal to this truth – that Nigerians are a deeply warm, peace-loving, humane people and they are capable of great courage and compassion. Our task is to strengthen and transform our institutions so that they better reflect these values,” Prof. Osinbajo stated.

The Vice President commended the Africa Polling Institute for organizing the event, which he noted was a significant work or social research that will help drive a more informed and constructive debate about Nigeria’s present and future.

Tags DO NOT HATE EACH OTHER - OSINBAJO# NIGERIANS ARE UNBREAKABLE