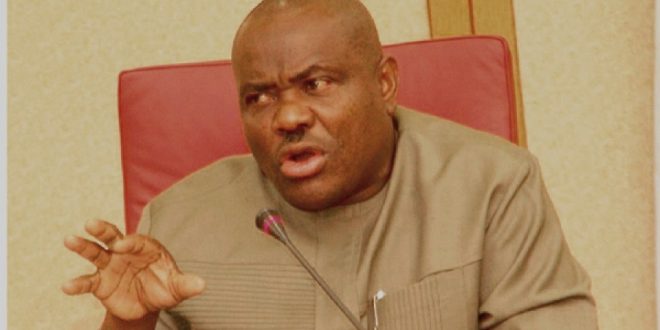 Nigeria Will Chase Out APC In 2023 To Stop Suffering – Wike

Idowu Hamed June 27, 2021 HEADLINE, NEWS, POLITICS Comments Off on Nigeria Will Chase Out APC In 2023 To Stop Suffering – Wike 15 Views

PORT-HARCOURT – Governor Nyesom Ezenwo Wike of Rivers State, has declared that the current sufferings visited on Nigerians will make them to chase the All Progressives Congress (APC) led federal government out of power in 2023.

Wike made the assertion during the inauguration of Pabod Breweries By-Pass Road and Oginigba – Ordinance link road at Trans Amadi Industrial Layout, Port Harcourt on Friday, June 25, 2021, which was performed by the former Nigeria’s Senate President, Senator Iyorchia Ayu.

The River State hencchman noted that “APC rode on social media propaganda that sounded so convincing at the time, but had since demonstrated how clueless they are in matters of governance.”

According to Wike, there is no amount of intimidation and threat that will make Nigerians to be deceived again, because they cannot afford to allow the sufferings to continue.

His words, “Nigeria needs prayers to come out from this situation we find ourselves. Not that we wanted it so, but we gave a government, a party, that was not prepared to govern a chance. A party that came through propaganda, social media, lies; now we have seen what we have caused ourselves.

Wike restated that the Peoples Democratic Party (PDP) remains the only hope of Nigeria to lead it out of the current woes.

He stated that Nigerians cannot afford to allow the mistakes of 2015 to repeat itself. According to him, another erroneous attempt to entrust APC with the responsibility of governance, will be disastrous for Nigerians.

“The only hope Nigerians have is the Peoples Democratic Party (PDP). If Nigerians make the mistake again and allow these (APC) people in 2023, then you have dug your graves.

Wike warned trailer trucks drivers against converting the just reconstructed road to a park as the State government will not hesitate to impound their trailers.