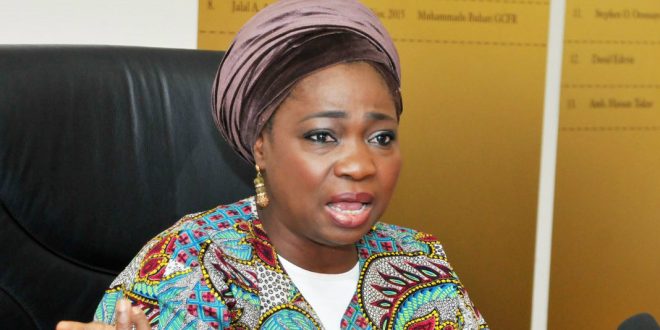 The Federal Government of Nigeria has said that  efforts is being made by the government to educate pilgrims going to Saudi Arabia following the alleged connivance of some airlines with drug syndicates, with a view to forestall killings of Nigerians.

Speaking with State House Correspondents, the aide to President Muhammadu Buhari on Diaspora matters, Abike Dabiri-Erewa, the aide said the government is insisting that all those travelling should be made to identify their baggage before boarding.

She also added, “In particular and this is a fact, Ethiopian Airlines and Egyptian Airlines, there are always cases of when you get there you see something in your bag. So, it is now mandatory for these airlines and for all those travelling to ensure that you identify your bags before you board. That has helped.

“It is important that if you are going to Saudi Arabia with any of these airlines, you identify your bags. We have had cases where you just get to Saudi Arabia, and somebody will knock on your door that something was found in your bag. It is mandatory for these airlines to screen these bags before you board the passengers,” she said.

She said the rampant cases of drug smuggling have reduced since the commencement of the inspection procedure, saying, “Since this law came into force where you ensure baggage is identified, it has reduced.

“The case I am talking about happened between 2016 and 2017. So it is important you identify your bags, take responsibility for your luggage.

“The Hajj Commission is also working with these airlines to ensure this is done because we do not want an innocent person to be jailed for an offence he or she did not commit,” she said.

“With 20 Nigerians on death row, we may be able to save those who did not carry out the crime. We know that drug issues in Saudi Arabia carried (carries) death penalty, but we will continue to ensure that we intervene properly.”

She said a Nigerian citizen was recently freed because of the intervention of the country’s mission in Jeddah, adding it was found out that he did not carry the drug into the country.

“The embassy fully intervened, and he was freed. There is one that has a court case, and the embassy is fully involved, and hopefully he too will be freed,” she said.

She, however, said it is difficult because Nigerian officials are not allowed to go to prison to see citizens on trial.

“They were allowed once, so the embassy is continuously requesting to go to prison and see the Nigerians that are on death row and those that have been sentenced to prison for various offences.

On the recent killing of a Nigerian woman caught with drugs, Mrs. Abike Dabiri-Erewa lamented the execution recently in Saudi Arabia for drug-related offences.

She said the executed woman is the eighth to be executed for drugs related offences in the last three years in the oil-rich Kingdom.

Mrs. Dabiri-Erewa noted that the government also condemned the action of four Nigerian citizens who were caught on video carrying out an armed robbery in Dubai, United Arab Emirate (UAE).

The Ministry of Interior of Saudi Arabia had announced that a female Nigerian drug trafficker and three other men: two from Pakistan and a Yemeni were executed on Monday for drug trafficking offences.

Recent executions bring to 53, the number of people put to death this year in the country.

Speaking with State House Correspondents, the aide to President Muhammadu Buhari on Diaspora matters, Abike Dabiri-Erewa, said the executed woman is the eighth to be executed for drugs related offences in the last three years in the oil-rich Kingdom.

She also said 20 others are also in jail with death sentences hanging on their necks.

The aide, who said some of those convicted, might be innocent.

She said the government found out that some airlines work with drug syndicates”by putting banned substances in the luggage of some innocent Nigerians, especially pilgrims”.

“So we have had cases where truly they didn’t commit the offence. We have appealed to the Saudi Authorities to make the trials fair, open and ensure that justice is done. Even if you are going to die, you will know that you die for an offence you committed.

“So, while we appeal to Nigerians going to Saudi Arabia, we know it is tough, obey the laws of the land. Even kolanut is treated as a drug. So we will continue to appeal to the Saudi Authorities to treat some of the cases with some form of leniency.

“As I said, we have 20 of them in Saudi, this is the eighth to be executed, and we are hopeful that maybe we will be able to save the others.”

Meanwhile, Mrs. Dabiri-Erewa described as disgraceful the arrest of five Nigerians, for allegedly robbing a bureau de change in Sharjah, the United Arab Emirates of about Dh2.3 million.

The men were caught on camera breaking into the bureau de change and smashing the glass barrier between the customers and the staff before they stole the money and fled.

Mrs. Dabiri-Erewa, said the men were a disgrace and an embarrassment to Nigeria and their families.

“These five boys are a disgrace to this country and an embarrassment. So if UAE decides to be hard on Nigerians, then we will complain that they are hard on us.

“We are going to continue to name those who disgrace the country anywhere in the world, and we will continue to appeal to Nigerians to be good ambassadors wherever they find themselves,” she said.

Mrs. Dabiri-Erewa also spoke about the reports of Xenophobia attacks on Nigerians in South Africa.

She said the attacks are not restricted to Nigerians alone

“In the case of South Africa, you need to break it down. We have xenophobic attacks which just happened recently and affected more of Malawians. I am sure you heard the President of South Africa when he came here, it is an embarrassment to South Africa, it is not something they are happy about and he said everything will be done to curb it. A lot of awareness must be put in place.

“The second case, is Nigerians killing Nigerians. We are having Nigerians taking drugs and cult wars to South Africa. The last killing of a Nigerian was by a fellow Nigerian. We have the names of the various cult groups, and they are drug-related.

“So, you cannot take that to another man’s country and expect that they will not be happy with you. Nigerians killing Nigerians in South Africa that is another disgraceful act.

“Nigerian community in South Africa must get involved, they know these organisations, they live among them. Recall the one that happened in Anambra was a fall out of that,” she said.

The aide said where South African citizens or law enforcement are found to be involved; the government often takes action.

She said, “Four policemen have been charged for their involvement in killings of Nigerians with the intervention of Mr. President.”

Previous Christian Chukwu Was Not Abandoned, Says Rangers
Next A Mother Knows; A film About Autism by GTBank