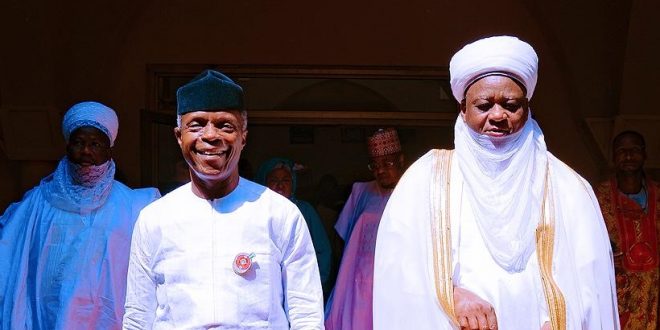 Nations Are Built By Sacrifices, Hardwork Of Leaders – Osinbajo 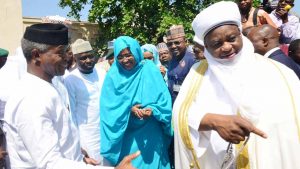 ABUJA: The Vice President Yemi Osinbajo has said that it is the duty of leaders to show the sort of tolerance that will allow for freedom of worship in a multi-ethnic, multi-religious society like ours.

According to a release e-signed and made available to StarTrend Int’l magazine & www.startrendinternational.com by Laolu Akande, Senior Special Assistant to the President on Media and Publicity, Osinbajo made this appeal at the opening ceremony of the General Assembly of the Nigerian Supreme Council For Islamic Affairs (NSCIA) on Friday, November 29, 2019.

His words; “Every Sunday, my family and over 100 Christians attend service in the Chapel at the Villa. The Chapel is located in the premises of the President and his family. It is located a few seconds away from the First Lady’s kitchen. Sometimes when I see the President on a Sunday morning, he asks me whether the service is over already or I am escaping from the service! That is the sort of tolerance that we need in a multi-ethnic, multi-religious society and it is the duty of leaders to show that sort of example.”

Read full text of the speech below:

REMARKS BY HIS EXCELLENCY, PROF. YEMI OSINBAJO, SAN, GCON, VICE PRESIDENT OF THE FEDERAL REPUBLIC OF NIGERIA AT THE OPENING CEREMONY OF THE GENERAL ASSEMBLY OF THE NIGERIAN SUPREME COUNCIL FOR ISLAMIC AFFAIRS ON THE 29TH OF NOVEMBER, 2019

It is a great honour to be here at this opening ceremony of the General Assembly of the Nigerian Supreme Council for Islamic Affairs. This Council is of particular importance to us as a nation because it not only promotes solidarity among Nigeria’s Muslims but also serves as an important intermediary between the government and the Muslim community and between Muslims and persons of other faiths.

As the highest decision-making body of the Council, I offer to you this morning, both a commendation and a challenge.

First, the commendation to you for the great leadership you have shown in galvanizing the Muslim community in Nigeria despite denominational differences. But also, for making the Council available for the promotion of interfaith peace, and religious tolerance in Nigeria.

The challenge stems from the theme of this meeting which is “Islam and National Development.” Permit me to put the topic in context so that we do not miss the essence of the topic. So, I recast the theme to read as follows quote, “The Role of Islam in the Development of a Multi-religious and Multi-ethnic Nation.” This is the gravamen of the matter and I believe my brother, Isa Pantami (Honourable Minister of Communications and Digital Economy who delivered the keynote address) did an excellent job.

Decades ago in this same country, it would not have been a major topic. Leaders in the first republic did not consider religious intolerance as a major national issue, they were more concerned about the issues that touched everyone regardless of religion or ethnicity; they were concerned about providing food, shelter, education and decent livelihoods. But today, no true leader can ignore the threat that religious bigotry and intolerance poses for the development of our nation. That is just the way it is.

But it is my respectful view that the burden of ensuring that faith promotes national development as opposed to impeding it is on leaders. This is the challenge I pose to you today.

A few months ago, at an interfaith gathering, I told the story of an occurrence on the 20th of June 2018. Christians in their village Nshar Yelwa, Plateau State were attacked by a horde of persons who were said to be Muslims, who had attacked other villages and had killed several Berom farmers who were mainly Christians. As Imam Abdullahi was finishing mid-day prayers, he and his congregation heard gunshots and went outside to see members of the village’s Christian community running helter-skelter. Instinctively, the Imam ushered 262 Christians into the mosque and some into his home next to the mosque. The Imam then went outside to confront the gunmen. He refused to allow them to enter, pleading with them to spare the Christians inside the mosque and his home. When the assailants were adamant, he told them that they would have to kill him first if they were going to kill the Christians, he had given refuge. They eventually left without killing any of the Christians in the mosque or in his home. Imam Abdullahi’s selflessness and sacrifice saved the lives of hundreds of people of a faith different from his own.

Imam Abdullahi not only refused to give up the Christians he had given refuge; he even offered his life in exchange for theirs. His moral courage is rooted in a profound recognition of our common humanity. His compassion, empathy and selflessness are an example to us as people of faith.

Jesus Christ told a story somewhat similar to this. Someone had asked Him the question, “how could he attain eternal life?” And Jesus replied by asking him what the law said on the matter. The man responded that the law says “Love God with all your heart and mind and love your neighbor as yourself.” Jesus then said, “Good, you go and obey that law and you will live.” However, the man asked him, “But who is my neighbour?”  Jesus then told him a parable which later came to be known as the story of the Good Samaritan.

It is the story of a man who was travelling between Jerusalem and Jericho, and was attacked by thieves. His property was stolen and he was beaten almost to death. As he lay on the road, a certain priest came by, saw him and walked by on the other side of the road. So also, a Levite, came by and walked by on the other side of the road. Then a Samaritan came by, (Samaritans were regarded as unbelievers by the Jews) stopped and took care of the injured man, putting him on his horse and then took him to an Inn, leaving the Inn-keeper money to take care of him until he returned. Jesus then asked the man, “of the three men who saw the injured man who was his neighbour?” The man answered that it was the Samaritan who had compassion for Him. Jesus then said to him go and do likewise.

Jesus said go and behave with love and compassion in the way that the Samaritan did. All leaders and this is my challenge to you today, need to learn from the simple, but deeply profound actions of the Good Samaritan and Chief Imam Abubakar. Both of them showed great love and compassion. They were not concerned about the race or religion of those whose lives they saved or whose properties were destroyed. All that mattered was that they were flesh and blood like themselves. They were simply ready to make any sacrifice for another human being.

We are at a historic juncture in the existence of our nation. Here and there are religious and tribal tensions. Many are beating the drums of ethnic and religious superiority. Some even seek to divide the nation into ethnic zones. Yet our constitution speaks in the clearest and highest terms of our national commitment to the equality of all Nigerians regardless of ethnicity, religion or status. It speaks of the imperative of all individuals and governments to respect the rights and dignity of every Nigerian. Our constitution speaks of freedom of worship, the liberty to belong to a faith of one’s choice and even change that faith without consequence.  But constitutional declarations mean nothing unless there are men and women ready to make the personal sacrifices to bridge the gap between rhetoric and constitutional ideals. Such men and women are not usually very many. But they do not have to be many to make a difference.

Let me add one more story, a few months ago, a leader of a large Christian congregation in a Northern State sought an audience with me. I asked him why, he said he wanted to speak to me about the Governor of his State. I assumed it was going to be a complaint because the governor of the State is a Muslim and I thought it might perhaps, be some conflict between Christians and Muslims in the community.

But it wasn’t. He said,” Your Excellency, I think the government should give national honors to those who promote the unity of the country.” He then told me how the Governor of his State had rebuilt several churches that were damaged by religious extremists who described themselves as Muslims. I was shocked first, by the fact that here was the leader of a church, asking that the Government should honour the Governor of his State for doing something that is unprecedented.

Yet there are States where Governors refuse to grant certificates of occupancy for the building of churches or places of religious gathering in outright violation of the constitution they swore to uphold.

Every Sunday, my family and over 100 Christians attend service in the Chapel at the Villa. The Chapel is located in the premises of the President and his family. It is located a few seconds away from the First Lady’s kitchen. Sometimes when I see the President on a Sunday morning, he asks me whether the service is over already or I am escaping from the service! That is the sort of tolerance that we need in a multi-ethnic, multi-religious society and it is the duty of leaders to show that sort of example.

Nations are built by the sacrifices, the hard work of leaders who do not care even if they are condemned by persons of their own religion or ethnicity, so long as they are confident that they act in obedience to the oaths they swore and to the Almighty God.  Such men and women are few, but the profundity of their actions invariably transform communities and nations as they bend the arc of history in the direction of unity, peace and progress. 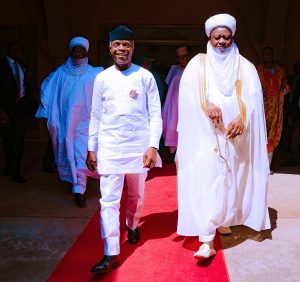 I have observed for many years the words and actions of his Royal Highness, the Sultan of Sokoto, how he has sought to build bridges with other faiths, locally and internationally, this is as it should be. The challenge of nation-building is not the noise of the religious bigots and nihilists, it is the silence and inaction of leaders of different faiths who know better, those who say and do nothing, and to whom we appeal today. Your words and actions may make the difference between peace and tragedy.

The Quran proclaims, “Human beings, we created you all from a male and a female, and made you into nations and tribes, so that you may know one another.” (Surah 49:13).

These words are important because they point us in the direction of our diversity, but that diversity is a source of strength, knowledge and unity and our nation at this point, requires men and women who look at our faith, Muslims and Christians who see first brothers and sisters, who see first human beings before we see faith.

It is now my very special pleasure and privilege to declare open this conference.

Thank you very much.

Tags Hardwork Of Leaders - Osinbajo# Nations Are Built By Sacrifices