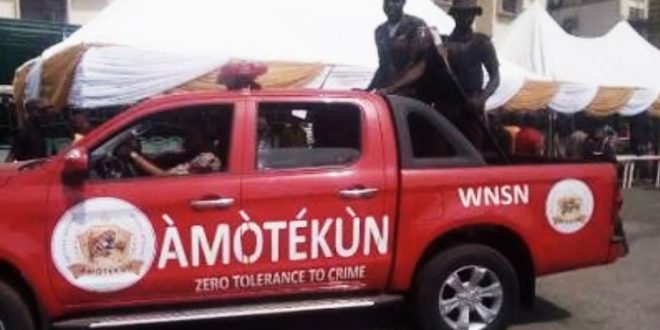 Operation Amotekun is a special security outfit launched by the governors of the South Western States to tame incessant killings and kidnappings in the region.

But the Federal Government through the office of the Attorney-General of the Federation and Minister of Justice, Mr. Abubakar Malami (SAN) had on Tuesday, January 14, 2020, declared the security outfit as illegal.

NANS in a Press conference with Journalists in Abeokuta, the Ogun State capital on Wednesday, January 15, 2020, described the declaration by the Federal government as “tactical move to to make the South/West zone unsafe for continuous attack on the people by the Fulani herdsmen”.

The association stressed that it was perplexed when the Anthony General said the security group runs fowl of the law.

The Southwest Coordinator of NANS, Kowe Odunayo who spoke with the journalists, alleged that the refusal of Amotekun by the Federal government and the northerners was a clear indication that the northerners are behind insecurity in the country.

Odunayo further alleged that the north only wants the Southwest to continue to suffer insecurity knowing that if security is strong in the Southwest, its economy would boost and it would have necessary resources to attain a sovereign state.

He insisted that insecurity would not be condoned in the Southwest zone.

His words: “It became mouth watering surprise for us when we heard that the powers that be outside our zone are not pleased with the move. This became more evident when the Fulani/Hausa youth group spoke though recently condemning our security architect even when it has nothing to do with them.

“As much as we have payed apt attention to the wordings of AG’s statement, we have noticed no other thing than politics and an attempt to block the West from defending itself against attacks by the North”.

He added, “We have realised that the refusal of the federal government and the Northerners are clearly behind insecurity in this country and we will not accept it”.

Odunayo however appealed to the Southwest Governors to stand on their feet and ensure that the laudable initiative is not killed by “some enemies of peace”.