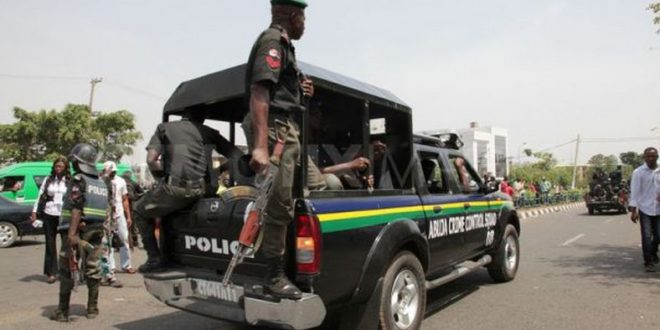 According to a report by The Nation, Loveday was said to have posed as the IGP to defraud unsuspecting members of the public of their hard earned money.

He was arrested alongside a Taxi driver, Ugochukwu Ohia, who was his accomplice in the fraud business.

According to reports, the duo was arrested by operatives of the Inspector General of Police Intelligence Response Team, IRT, after Loveday allegedly defrauded a police contractor, Shuiabu Semion, of the sum of N800,000, under the guise of helping him to renew his contract of supplying gas to the Nigeria Police Force (NPF), which was terminated in the year, 2002.

The Imo State-born suspect, who is married with a child, said: “I am a gym instructor, but I went into internet fraud because my wife was delivered of a baby through caesarian section but  we later lost the baby after I paid the sum of N320,000, which eventually made me broke.

“One of my wife’s friends, one Ihuoma, who came to sympathise with me over the death of my child, lured me into internet fraud. I started by using DIG Peace Igbokwe’s  photographs on Facebook and people were coming to look for job through me, while many others, including policemen, came to  seek for opportunity to attend peacekeeping missions; others  came to seek for promotions.

“I charged between N70,000 to 60,000 for people seeking for peace keeping missions and N200,000 for policemen seeking promotions. Whenever they started chatting with me, I usually referred them to my ‘protocol officer’ that would help them process it.

“I usually gave them the name of the officer, which was ACP Luka Abraham, with this phone number 08098306171 which was my phone number and when the person called and we were done with negotiation on how to assist them, I would then send an account name bearing Sunday Aduyikodu with account number 2083471724 and  then they would pay me.

“But after DIG Igbokwe retired, I opened another account because I knew people would no longer want to do business with her again. I later set up  an  account with the photographs of the new IGP Abubakar Adamu and with it, I started using the profile on  January23, 2019 and it was just two persons that have  paid into that account.

Continuing, Loveday said: “One of them who requested for peacekeeping paid me N15,000, while another person, who is one Mr. Semion,was requesting for the renewal  of his gas contract with the police and he  paid N20,000 only .

“I went further to demand an additional N30,000 from the man for general processing and the man told me he had  no money with him but he had  a brother who lives in Abuja who can get me the money in cash. I told him that I was going to send my orderly to his filling station and then hired a taxi driver to take me to that location.

“While we were running, our vehicle had a minor accident at the City Gate; we stopped to check it but some mobile policemen at that place saw us, arrested us and handed us over to the  policemen who were  chasing us,” he added.

While confessing, the 38-year-old Ugochukwu Ohai, said: “I am a taxi driver and I reside in Lugbe area of Abuja.  Ugochukwu (Loveday) is my friend;  we have known each other since 2012 and he told me that he is a gym instructor.

“I am aware that Loveday was also into internet fraud, but penultimate Tuesday, he told me that someone was owing him money and that the person who was owing him wanted him to come to a filling station within the area and that when we got there, I would be the one to call the person with my own phone and when the person showed up, he would receive the money from the person.

“When we got there, I made the call and when the person came out, he came towards our car with an envelope and when he sighted us, he shouted and   people came out and  their vehicle  tried to block us, but I drove dangerously and escaped from the scene, but,  unfortunately I had an accident and we were arrested.’’

Previous SARS Brutality: IGP Moves To Take Guns Away From Police?
Next Drama As Father Refuses To Give Out His Daughter After Collecting N850,000 Bride Price