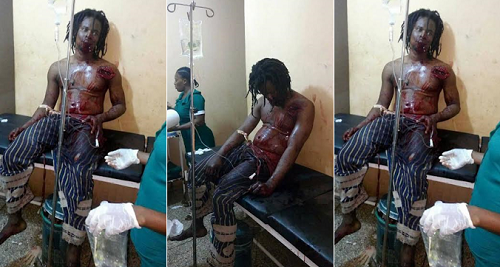 Idowu Hamed April 15, 2017 METROLINE Comments Off on How Juju Priest Lands In Hospital With Gunshot Wounds After He Asked Someone To Shoot Him In Bid To Prove His Spiritual Powers 62 Views

A renowned fetish priest is currently nursing a gunshot wound at the Sunyani Government Hospital in the Brong Ahafo region in a bid to test his supernatural powers.
Desmond aka Nana Tolofasito who believed he had fortified himself against gunshots asked someone to try shooting him with a single barrel gun but the result saw the fetish priest land on the ground and bleeding copiously after he was shot at close range on his chest.
According to eyewitnesses, the incident occurred at Sekyedumase Newtown where the fetish priest mans a shrine.
“He claimed to be more spiritual and asked somebody to shoot him with gun, with the hope nothing was going to happen, but he suffered the consequences of his action and has since been hospitalised”, the eyewitness said.