Breaking News
Home / NEWS / My Grouse With Dangote -Amosun …Says; Contractors Are Back to Site 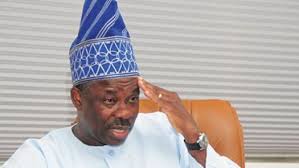 My Grouse With Dangote -Amosun …Says; Contractors Are Back to Site

Idowu Hamed April 15, 2017 NEWS Comments Off on My Grouse With Dangote -Amosun …Says; Contractors Are Back to Site 81 Views

The Ogun State Governor, Ibikunle Amosun, on Monday accused Dangote Cement Company of neglecting its corporate social responsibility in the state.
He said this has led to a strained relationship between him and Aliko Dangote, the business mogul and President of the Dangote Group.
Mr. Amosun stated this at a press conference in his office in Abeokuta.
The Governor said trucks conveying products of the company were major contributors to the damage to roads in the state, which he said the company has refused to contribute to fixing.
“Why I am against Dangote is that the heavy trucks of the company damage the roads. An example is *Ilaro-Papalanto road*. Is it the cars of our people that destroyed the roads? No! It is the heavy trucks of the company”, he said.
He said Dangote Cement operating in Ibese/Ilaro axis of Ogun West Senatorial District had contributed to damaging some of the roads.
Mr. Amosun said rather than the company to contributing towards the repair of the roads, it has kept mute, although it is known to be making big money in the state.
The governor said the company should rise up to the challenges of social responsibility to the people of the state.
Mr. Amosun disclosed that the state government had concluded financial arrangements for contractors handling road projects to return to sites which they had abandoned due to lack of funds.
Virtually all roads under construction across the state were abandoned over a year ago, following paucity of funds from the government.
Mr. Amosun said he has mobilised the contractors from the Paris Club refund, vowing that no road project would be left uncompleted at the end of his administration.
“We have mobilised our contractors back to sites. We shall ensure that all works are completed before we leave office. We are hopeful that Federal Government will give us another tranche of the Paris fund”, he stated.
The governor also called on the federal government to cede more of its roads to state governments for rehabilitation and construction, noting that the federal government cannot do it alone.
“We want federal government to cede all the federal roads in the state to the state government so as to repair them”, Mr. Amosun stated.
He pointed out that most of the federal roads in the state had been neglected and were in deplorable conditions.
He named some of the roads as Sagamu/Ogijo, Lagos/ Abeokuta, Papalanto-interchange, Lafenwa-Ayetoro, *Papalanto/Ilaro* and Lagos/ Ibadan.
He said‎ the state government spends about N400 million on federal roads every raining season to make the roads motorable, just as he also disclosed that the federal government was already owing the state N124 billion for repairing federal roads in the state.
“We always use N400 million every raining season to intervene on these roads, we will appreciate if the federal government can cede the roads to us, we have the capacity to do the roads better than what they can do.
“We realize we have two years to leave, Ogun standard is what we believe, we will continue to give our people the dividends of democracy. We have remobilised our contractors two weeks ago, they are now back on site, we will walk our talk”.
Mr. Amosun said some of the roads which the contractors are about to return to work on are the Ilo-Awela road, Moshood Abiola way, OGTV road, Akute road, Atan Agbara road and Akangba/Ilese road.
In another development, the Ogun State Governor, Amosun, on Monday March 27, 2017, announced that contractors working on all the ongoing projects across the state have been mobilized back to site.
Governor Amosun stated this while briefing journalists after the weekly State Executive Council meeting held at the Governor’s office, Oke Mosan, Abeokuta, on Monday.
“Contractors working on all our ongoing projects have been mobilised back to site across the state in the last one week and activities will now resume fully in all those places,” Governor Amosun said.
The Governor, who assured that no project would be abandoned, said his administration would make meaningful impacts in all the sectors especially Education, Housing, Agriculture and Health.
“We are determined to change the landscape of Ogun State completely,” Governor Amosun said.
In the area of road infrastructure, the governor mentioned some of the roads where contractors have been mobilized back to site to include Magboro-Arepo road; Ilara-Ijoun-Ilase road; Ejinrin-Oluwalogbon road; Ijoko-Akute-Alagbole road; Lafenwa-Ayetoro road; and Enugada-Adatan road, Ikangba-Ilese-Itele- Ijebu Mushin road that spans across four local government areas; Ijebu Igbo bridge; Ilisan-Ago Iwoye road; Folagbade-Ibadan garage-Imowo road and Sagamu-Ogijo road among several others.
In the same vein, Governor Amosun also mentioned Atan-Agbara-Lusada road; Ilo-Awela road; Ilaro-Owode road; Ilaro township road; Ilaro township bridge and Ojuore Ota bridge among several others.
He added that pedestrian bridges would also be constructed in Panseke, Mowe and Ibafo areas of the state.
While explaining the capital intensive nature of the Sango-Ojodu Abiodun road, Governor Amosun said contractors have also been mobilised to return to the project while assuring that the five flyovers on the road would be the first to be completed.
Governor Amosun further revealed that rural dwellers are not left out in the infrastructural development assuring that contractors have been mobilised to work on rural roads across the state.
The Governor also reaffirmed his administrations’ commitment towards completing the Abeokuta City Center, the Airport, and railway projects before the end of his tenure of office.
Governor Amosun also called on the Federal Government to cede some of the Federal roads in the state such as the Sagamu-Ogijo road, Papalanto-Interchange road, Epe-Ijebu Ode road and Lagos-Sango-Abeokuta road to the state for proper maintenance.
The Governor who commended the President Muhammadu Buhari led government for leaving no one in doubt about it’s intention to fix the huge infrastructural deficit in the country, revealed that the Federal Government has promised to refund N124 billion naira to Ogun State government for the federal roads reconstructed across the state. 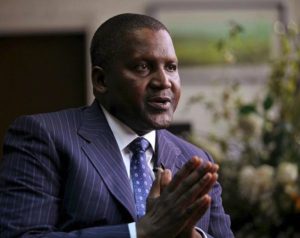 Publisher and Editor in Chief - Magazine and Online Tel: 08038525526 - 08023339764 - 08055657329 Email: startrendinter@gmail.com
Previous Taxi Driver Welcomes Baby With Wife Who Works As A Maid In A Chinese Company …Says Baby Looks Exactly Like Him
Next How Juju Priest Lands In Hospital With Gunshot Wounds After He Asked Someone To Shoot Him In Bid To Prove His Spiritual Powers