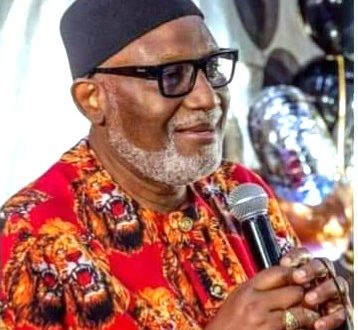 Ondo State Governor, Arakunrin Oluwarotimi Akeredolu, SAN, has eulogized the former National Organizing Secretary of the All Progressives Congress (APC) Senator Osita Izunaso over his commitment to the underprivileged and his tenacity for pursing what is right.

Governor Akeredolu joined other friends and dignitaries across the country to celebrate the former Senator at a dinner held in his honour to celebrate his Call to Bar.

Governor Akeredolu who said he was delighted to attend the event, recalled that Osita’s role and instrumentality helped him in becoming the candidate of the APC in the November 2016 governorship election in Ondo State.

He said despite not knowing him very deeply, Senator Osita fought a great battle behind him to be the candidate of the party in 2016.

Hear him, “Osita has done me a favour and I must pay back. I must confess here that I am Governor by the grace of God and Osita’s instrumentality

“He did not rig election for me because he was not in charge of my primary. But he did not know me deeply, but he went behind me and fought great battle for me to be candidate of the party (In 2016). His voice opened the way for me.

“I want to use this opportunity to thank our great leader, the Chairman he served with, former Governor Odigie Oyegun. You are men of honour.”

While congratulating Senator Osita, Governor Akeredolu welcomed him into the law profession which he described as noble.

He charged him to bring his experience in life to bear as he begins the law practice, noting that the best lawyers are people with previous experience.

“You made a good choice. You can’t have better lawyers than those who are experienced in life. Bring your experience in life to bear. You are welcome to the noble profession. Osita I congratulate you. You are a man that has helped us in the party. Your time will never be forgotten. You know what it takes to organize”