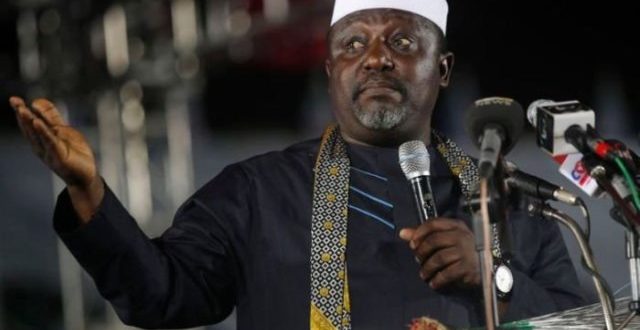 The Governor of Imo State, Chief Rochas Okorocha has advised the people of the South-East to shelve their 2023 presidential ambition, saying that the race for the nation’s number one seat would directly be between the North and the South-west .

He said the rejection of the All Progressive Congress (APC)’s presidential candidate, Muhammadu Buhari in preference to his Peoples Democratic Party (PDP) counterpart Atiku Abubakar by the South-east foreclosed the prospect of the zone to clinch the presidency in the next four years.

The governor who made this disclosure to journalists while giving an update of political developments in the state, described the outcome of the last election in the zone as a huge minus to the Igbo

nation, lamenting that the zone might no longer be represented where the APC would be discussed in the country.

He however, promised to rebuild and to reposition the party in the state, which did not produce a single member in the state House of Assembly.

Okorocha berated the Independent National Electoral Commission (INEC) for its abysmal performance in respect of the conduct of elections in the state, contending that what the electoral umpire did was a mockery and an embarrassment to the democratic world.

“The Resident Electoral Commissioner (REC) of the Independent National Electoral Commission (INEC) in the state was merely recruited to do a hatchet job and the allegation of my election result being declared under duress was nothing but a fabricated fallacy which does not reflect the reality.

“More than 70 agents of political parties, the Police and the DSS were there and they all reported that there was nothing like that and I hope to get my Certificate of Return from INEC soonest or else who will they give it to?, he queried.

The embattled governor however, stated that the APC had continued to wallow in controversies, which led to its abysmal outing in the state and the South-east during the just- concluded general election.

He accused the party National Chairman of APC, Adams Oshiomole, of piloting the affairs of the party with impunity, envy, greed and arrogance.