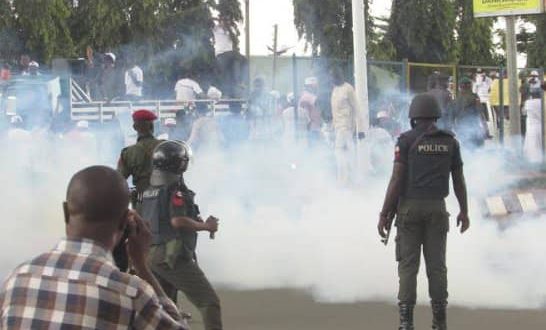 Police in Enugu on Tuesday used tear gas on some INEC ad-hoc staff at the just concluded general elections who protested the non-payment of their allowances in the state.

Newsmen, who were at the scene, reported that the tear gas affected passersby, school children and motorists who ran helter-skelter for their lives.

Reports have it that the protesters comprising corps members, students and workers besieged the INEC headquarters in the state and blocked entrance and exit to the building.

Mr Tony Ani, a 42 year old man, who served as an Assistant Presiding Officer (APO 3) lamented the nonpayment of allowances for both the Presidential and Governorship elections including the inhumane treatment meted out to them.

“You can imagine me at this my age coming here for the past three weeks over this issue of nonpayment.
“I worked at Akama Primary School, Ezeagu Local Government during the Presidential and Primary elections and we were told to fill attendance and payment details.
“Ever since, we have not received payment and they will always tell us to write our names and account number just to pacify us, but as soon as we leave, they will trash it,” he said.

A Corps member, Miss Chioma Emmanuel, who worked at Igbo-etiti, said she had not been paid any of the allowances including training allowance since the elections ended in the state.

She noted that the idea of the protest was formed when a WhatsApp page was created for those yet to receive allowance.

In the same vein, a student of Enugu State University of Technology (ESUT) who claimed anonymity for fear of being disciplined by the school authority, berated INEC for treating the issue of allowance with levity.
“The painful thing was that after failing to adequately make provision for accommodation, they still refused to pay us.
“This money is what I hope to buy study materials and augment for my upkeep,” he said.

Reacting, the INEC REC in Enugu State, Dr. Emeka Ononamadu described the protesters as `impostors’ sponsored to pressurize INEC into paying those that did not work.

Ononamadu, who refused to address the protesters, told journalists that those protesting were in the third category of payment.
“One thing you need to know is that there are three sets of people we are dealing with now.
“There are the corps members, those posted but did not work and those who were not posted but made the list because their names were subverted with that of others.

“Those protesting are those students who are not corps members and who were not posted by INEC but bribed their way through and ended up working as Presiding Officers and APO 1.

“Most of the protesters are in the third category of people and if you see any corps member among them, then it is either the fault of their Local Government Inspectors or head of mobilization because they are the ones we are dealing with directly.
“I am determined and resolute that I will not pay those not vetted or those who did not work but wants to be paid.
“We are talking about 20,000 people to be paid and we have to follow due process so it does not backfire on us.

“It is only those that worked in Enugu North, East and Nsukka that we are sorting out now and they would have been paid since yesterday if not that the payment platform managed by CBN had issues but has been rectified,” he said.

Also, the Head of ICT, Mr Richard Onu said for three days now, he and his team had been working to ensure that the right people receive their pay.
“Even as I speak, some people are already receiving payment.

“Payment is not something that can be done in a hurry because there is a budget for payment and we have to ensure the right persons are paid that is why we are going through the painstaking process of vetting.
“The only people yet to receive payment as at now are those who worked at Nsukka, Enugu North and East and it is because of the large number of people who worked there due to the large polling unit,” Onu said.

The ICT head also assured that those who were used to replace a lot of corps member who did not show up during the Presidential elections would also be sorted.
He urged them to exercise patience as all the right persons eligible for payment would be paid.
Workers were seen standing and watching the protesters who were chanting ‘INEC must pay us.’

As at the time of filing this report, the protesters have locked the gates leading to the building with chains and padlock blocking staff and visitors access to the INEC office.