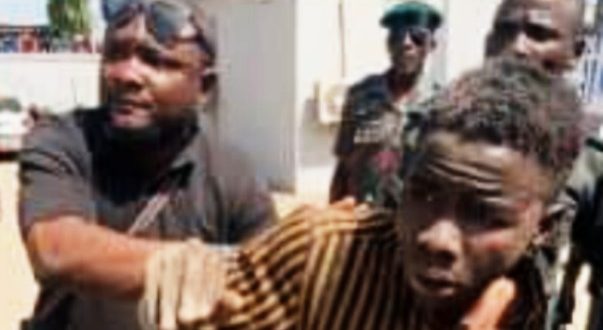 One of the suspected robbers arrested inside the bank

ABUJA: First Bank of Nigeria Limited has commended the immediate response by the police and military during an aborted robbery attempt at its Mpape, Abuja branch, a suburb of the Nigeria’s federal capital, on Saturday, December 27, 2019.

According to a statement e-signed and made available to the media by Folake Ani-Mumuney, Group Head, Marketing & Corporate Communications, First Bank of Nigeria Limited, the Bank said it truly appreciate the security agencies for their doggedness and commitment.

”We wish to inform everyone that the attempted robbery incident that happened at one of our branches in Abuja has been foiled; customers and staff are unhurt; and the suspects have been apprehended.

“The immediate response by the police and military is very commendable and we truly appreciate them for their doggedness and commitment,” the Bank posited.

Recalled, six armed robbers were said to have stormed the Bank shooting sporadically into the air to scare people away. Some staff of the Bank were on duty to balance their account as at time of the incident.

The criminals were said to have succeeded in gaining entry into the banking hall. But shortly after gaining access, the police and army arrived the scene, but the robbers had refused to come out of the Bank.

It was gathered that one of the robbers who made attempt to force his way out was shot but remained indoor with gunshots injury.

However,  in a statement e-signed and made available to the media by Mariam Yusuf, the Command Public Relations Officers hinted that the robbers were trapped in the banking hall for many hours

following the arrival of the police who surrounded the building.

The statement added that the police operatives stopped the robbers from raiding the Bank and arrested four out of the six armed robbers who invaded the Bank have been arrested by the security operatives while one of them was gunned down.