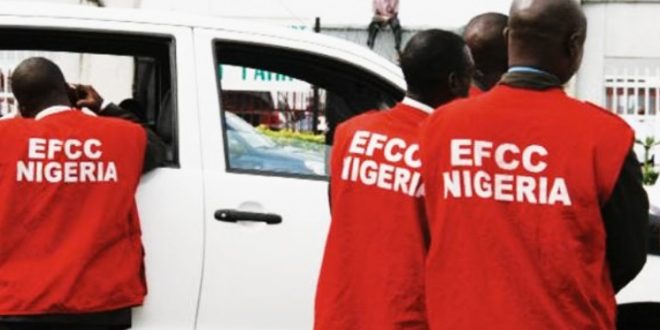 ABEOKUTA: The Economic and Financial Crimes Commission (EFCC) on Thursday November 14, 2019 vowed to combat corruption bedevilling the nation to the barest minimum until Nigeria retakes its leading position among the comity of nations.

This came as the Ag. Chairman of the Commission, Mr Ibrahim Magu decried the rate at which corrupt practices has eaten up the fibre of the nation.

Magu spoke at a maiden event and seminar series organised by the Nigeria Labour Congress (NLC) in Abeokuta, the Ogun State capital.

The Chairman who was represented by the Ibadan Zonal Officer of the Commission, Mr Jide Jegede stressed that among many damages that corruption has caused on the nation is setback, adding that the problem could only be solved if citizens could join government in the fight.

He hinted that EFCC is saddled with the responsibility to fight corruption in both private and public sectors of the country, adding that Nigerians could still do more to eradicate corruption or drastically reduce it.

He lamented that, “Before the regime of corruption, we had food sufficiency; our civil service was standard; our economy was booming; our education system was world class. Indeed we ran a system that every citizen was proud of and it was almost unheard of for any of our citizens to seek a greener pastures elsewhere.

“We can still do more to rid our system of corruption. This is the concern of President Muhammadu Buhari when he warned that if we don’t kill corruption, corruption will kill us”

Magu continued, “But sadly the table turned at the introduction of corruption. The more we allowed it to grow, the more it undermined our system and weakens our capacity to develop further”.

In his address, the Chairman of Nigeria Labour Congress, Ogun State Council, Comrade Emmanuel Abimbola Bankole, said labour was working assiduously with anti-corruption agencies in the fight against corrupting as the ugly trend has affected the working population.

Bankole explained that our country is struggling under the burden of myriads of socio-economic challenges.

He therefore called on other Nigerians to join hands with Labour to wage war against corruption and equally pledged to organise enlightenment campaigns, lectures and sensitisation programmes for members in the country against human rights abuses and corrupt practices in our society.