Breaking News
Home / HEADLINE / Edo 2020: Oshiomhole Didn’t Pick Me Up From Roadside, He Helped Me Just As I Helped Him – Obaseki 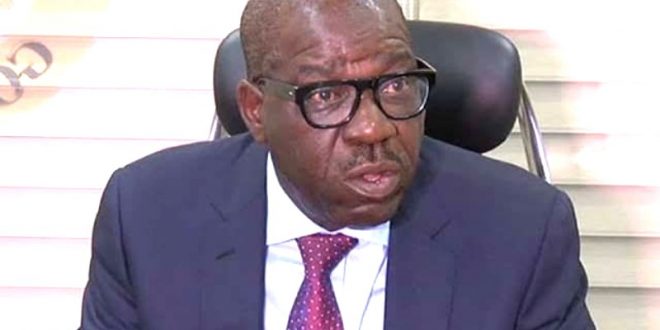 Edo 2020: Oshiomhole Didn’t Pick Me Up From Roadside, He Helped Me Just As I Helped Him – Obaseki

BENIN CITY – The Edo State Governor Godwin Obaseki presently seeking reelection has said that Comrade Adams Oshiomhole, the former National Chairman of the ruling political party, All Progressives Congress (APC) didn’t pick him from the roadside, saying he helped him just as he also helped him and not his godfather.

Obaseki stated this in a no-holds-barred interview he granted senior journalists recentl, asserting, “ he helped me just as I helped him”.

His words, “When I became governor, we had an understanding of how we were going to run the state. We had agreed to put an end to the use of non-state actors in revenue collection. These persons had been harassing women in markets. We had young men who didn’t respect the enigies and onogies (traditional rulers); they took over land assets and sold a plot to three to five people.

“These fellas went about with guns and constituted a nuisance. Some people also came and promised young people jobs abroad, only for the young people to make journeys to Europe through Libya and the Mediterranean Sea. The whole place was crisis-ridden. Nobody wanted to come to Edo to invest.

“I said we couldn’t continue this way. We needed to change the status quo. I barred thugs from the roads and markets and ensured that they stopped harassing market women and other persons in the state.

“But some of the leaders said they would have none of that because, according to them, they helped me get into the office. But the fact remains that they didn’t help me, the people voted for me and God helped me.”

Obaseki created further, “As for sharing of the state’s money, I insisted that we must use the money for the people and change their lives with it. Crude oil prices were low and are still low. There was a lot to do. Debts had piled up. There was work on the ground to be done and if we used the available funds to entertain politicians, there would be nothing left to work for the people. I said no to them. I came to serve God and my people. Whatever is available to us, we would manage it to work for the people.

“And today, many of our people are happy. Pensioners get their pay at the end of every month. They don’t protest anymore. As at the time I assumed office, they were always at Ring Road, adorned in black attire, crying that they had not been paid. These are old people with families. I asked, ‘How will we be sharing money in government while we haven’t addressed this sort of challenge’?.

“I came to work pro bono for government for seven years. Oshiomhole said this himself. I don’t see him as my godfather. He helped me just as I helped him, even before he became a governor. I called people, raised money and helped him to become governor. That relationship is not godfather-godson relationship.

“When I said I wanted to run for office, he reciprocated and helped me. We moved together to campaign. I staked my money on it and got friends to fund my election. He didn’t pick me up from the roadside, gave me clothing and put me in Government House. That was not the case.

“From what he has done from the point when he became the national chairman of the APC, he doesn’t seem to be the same person I worked with.

It also goes to show that he was hiding these tendencies from us before now. When we analysed his actions, it dawned on us that this was what he meant all this while when he was fighting godfathers. He called the late Tony Anenih a godfather and said a lot about him. We agreed with him.”

The Edo state helman posited, “When he became the APC national chairman, he became worse than a godfather; he became a political bully. Nobody could talk where he was…”

Obaseki whose second term ambition made him dump APC to become the candidate of PDP made these assertions in the face of a relationship turned sour.

Observers of the scene were of the opinion that before things went awry between the duo, Oshiomhole and Obaseki were birds of the same feathers, saying both helped one an another to achieve their goals in life.

However, political pundits were of the opinion that whether the fight would cost Obaseki his second term ambition as the candidate of the PDP for the September 19, 2020 Edo Gubernatorial election remains a thing, even the soothsayer can tell.

Tags Edo 2020: Oshiomhole Didn’t Pick Me Up From Roadside He Helped Me Just As I Helped Him - Obaseki#