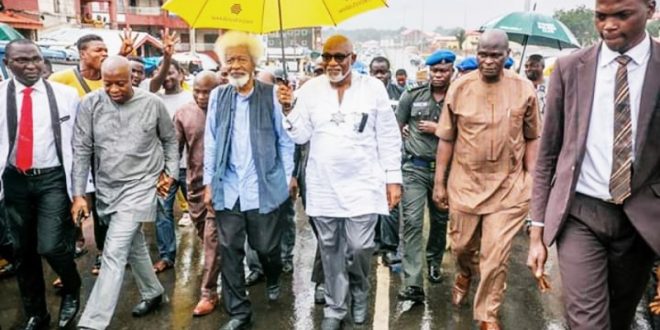 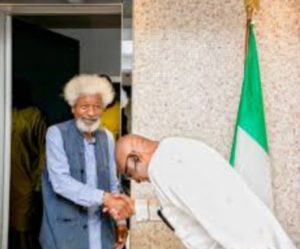 Nobel Laureate Prof. Wole Soyinka is unarguably an untiring Nigerian whose understanding and views on social and political issues in the country cannot be ignored by lovers of good government.

Even the dictatorial military government that trampled upon the rights of Nigerians for decades and denied them the benefit of electing their leaders in a peaceful manner for years before democracy returned to Nigeria about 20 years ago could not but remember Wole Soyinka as a fearless individual who has chosen to live his life to fight injustice and oppression for the purpose of enhancing the advancement of humanity.

The playwright, besides being reputed as a man who always speaks the truth no matter whose ox is gored, also carefully chooses his company. So, the literary giant’s recent visit to Ondo State was not accidental in any form. In fact, the visit cannot but be likened to the proverbial killing of two birds with a stone.

The first point of call when Prof. Soyinka visited Ondo State for the D O Fagunwa Study Group Second International Conference which took place at the International Culture and Events Centre (The Dome), Akure, was Governor Oluwarotimi Akeredolu’s Office, where both men pondered on relevant sundary issues concerning the development of the Sunshine State and the country in general. 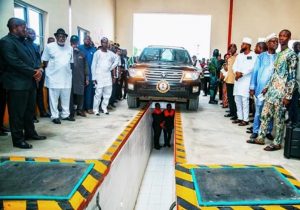 The purpose of the 2019 edition of the D.O. Faguwa Study Group’s conference is to celebrate Wole Soyinka’s 85th birthday, considering his long years of unwavering fight, support and commitment to the course of social justice through literature writing and other legitimate means.

The conference was themed: ”Wole Soyinka, D.O. Fagunwa and the Yoruba Artistic Heritage.”

At the venue of the conference, Soyinka’s virtues as a brave icon, role model and giant pace setter, among others, were celebrated.

Leading the pack of dignitaries that showered eccommium on the literary giant were Prof. Ropo Sekooni, Jimmy Solanke and cinimartogragber Tunde Kilani, among others. They all hailed Soyinka as a true Nigerian whose views on issues would always arouse the attention of discerning minds. 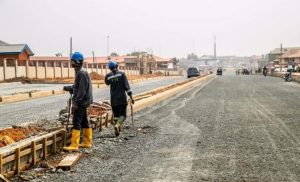 Wole Soyinka, who, no doubt, appreciated the popular dictum: “Seeing is Believing” chose to visit a few of Governor Akeredolu’s developmental project sites. He went beyond relying on the various reports on the governor’s performance to visit a few of the project sites where he commended the people of the Sunshine State for making the right choice in electing Akeredolu as their governor.

Without mincing word, Soyinka expressed gratitude to the current Ondo State Government for celebrating his 85th birthday and for the completion of the ‘Dome’ which was meant to celebrate art and culture.

He also hailed Akeredolu’s infrastructural strides in Ondo State. The literary giant’s accolade stemmed from the indubitable fact that Akeredolu’s financial management ingenuity reflected in the prudent allocation of the scare public resources to promote the total wellbeing of the people of the. state.

The Nobel Laureate, who was personally driven and conducted round a few of the project sites in Akure, the state capital, by Governor Akeredolu, revealed that he had been on constant visits to the state in the course of his literary work and observed that the governor had changed the face of the Sunshine State in spite of the dwindling monthly allocation from Abuja.

Soyinka, with the governor and members of the state executive council, saw and inspected the ‘A’Division/NEPA and the ongoing dualisation of NEPA/Oluwatuyi Roundabout Road projects. 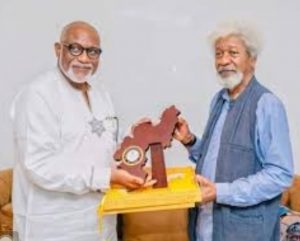 Marvelled by the progress of the road projects, Soyinka said: “The fact shows the light.” He explained that it took him some time to recognise the A’Division/NEPA and NEPA/Olukayode ongoing dualisation project because of the serious infrastructural transformation that is going on in the area.

Another visit to the workshop where about 284 dead and decayed vehicles were being reconditioned to enhance productivity in the public service elicited a profound commentary from Soyinka, describing the workshop as a laboratory, where things hitherto considered impossible are now being made possible.

Soyinka could not hide his excitement following his appreciation of the fact that the new initiative exposed artisans from Ondo State to new technology and modern ways of doing things. He hailed Governor Akeredolu for championing the cost-saving and strategic leadership initiative. 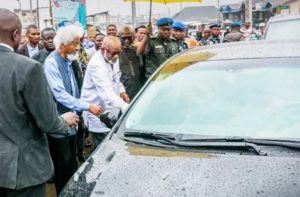 The Nobel Laureate, regarded as an advocate of good governance and transparent leadership, spared a thought for the security challenges confronting the South-West. He urged declaration of state of emergency to tackle the menace in the region.

Soyinka said: “As regards the insecurity in the South West, there is an emergency. There should be a declaration of security emergency throughout the land and measures taken accordingly.

“There are many directions of security lapses, you know it here, especially in Ondo State, it is a calamity throughout the whole nation. There is an emergency.”

The playwright asked the governors, especially those in the South West geo-political zone, to work assiduously toward tackling the security menace. 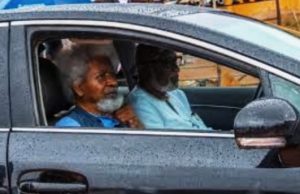 Akeredolu did not hide his love for the novelist’s contribution to development of knowledge. Besides, he described Soyinka as a first-class academic, playwright, poet, novelist and great human condition activist.

The governor perceived Soyinka’s life as a lesson for public office holders because he had elevated the art of partisan living as the biggest ideal of social reclamation.