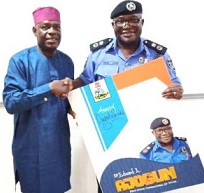 CP Edward Ajogun in a warm handshake with Elhadj AbuSatar Hamed when he was presented with a congratulatory card on the occasion.

ABEOKUTA – The Commissioner of Police in Ogun State, CP Edward Ajogun has revealed the secret behind the violence-free #EndSARS protest in the state, unlike what obtained in other states of the federation.

The Commissioner hinged the success recorded during and after the protests to mutual and symbiotic relationship that exists between the Command and all critical stakeholders.

Ajogun disclosed this on Wednesday, November 11, 2020 when Executive members of the Federated Chapel of the Nigeria Union of Journalists (NUJ), Ogun State Council, led by its Chairman, Elhadj AbuSatar Idowu Hamed paid a courtesy visit to him at the Police Headquarters, Eleweran, Abeokuta, the state capital.

He explained that Ogun Command of the Nigerian Police had been interfacing with traditional rulers, community leaders, youth leaders, people and other sectors of the society in the state, with a view to forestalling any act of criminality amongst the citizenry.

The Commissioner pointed out that when the protest hit the peak in areas like Sango, Atan-Ota, Mowe etc, timely intervention of the community leaders, royal fathers, the PCRC amongst others prevented killing of Police and burning of Police stations in the state.

He however acknowledged that the synergy existing between the police and other security agencies like the Army, Civil Defence, DSS, Vigilante, Trace, FRSC, etc, no doubt played a major role that made the protest violence-free in the state.

CP Ajogun also praised the media in the state for not heating up the protest through sensational reports, rather the Ogun journalists acted professionally, adding that the fourth estate of the realm should work very hard to kill fake news in the country.

His words, ”Our initial effort to carry the Community along in having a peaceful society really helped during the time of crisis. I gave kudos to the Community leaders, opinion leaders, royal fathers, journalists and religious leaders as well as members of the PCRC at different units in the state who helped to curtail violence in different parts of the state.

“I commend all our officers for their loyalty and resilience during the period, though it was a great challenge, but their ability to manage the crisis, and appeal to the community for peace helped greatly. This we were able to achieve through our constant town hall meetings before the period.”

The CP equally lauded the efforts of residents of Ogun communities for demonstrating that they are peace-loving people.

“People of Ogun State, most especially the youths also show that they are lovers of peace by working together with the Police and other security agencies to contain the #EndSARS protest in the state”.

CP Ajogun however called on the parents and guardians to monitor and check their children and wards from joining cult groups, saying, “Ogun State Police Command would continue to exercise its constitutional duty of protecting lives and properties of the citizenry.”

Earlier in his speech, Elhadj AbuSatar Hamed congratulated the Ogun State Commissioner of Police and officers and men of the command for successfuly and peacefully containing the #EndSARS protest in the state.

His words, “CP Ajogun, this is to commend you, together with officers and men of the Ogun State Police Command for the successful handling of the recent #EndSARS protest in the state.

“During this crisis, you and your officers indeed demonstrated the sense of outstanding professionalism that Nigerian Police Force is known for all over the world.

“We pray that Almighty God shall continue to guide and protect you, together with officers and men of the Ogun State Police Command.”