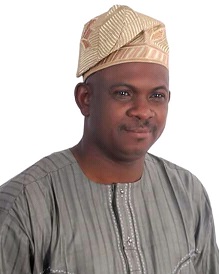 OGUN WATERSIDE: In his quest to display transparency and achieve even distribution of welfare package to the people of Ogun Waterside Local Government, the Transition Committee Chairman Com. Femi Onanuga has graciously handed over the relief items provided by the Ogun State Governor, Prince Dapo Abiodun which contains food items to cushion the effect of lockdown of people and economic activities culminated from the coronavirus pandemic ravaging the country.

According to a press release e-signed and made available to StarTrend Int’l magazine & www.startrendinternational.com by Prince Segun Soneye, Director Information, OWLG, the Chairman in his speech appreciated the Governor for this gesture and enjoined the committee to make sure the distribution is evenly distributed from ward-to-ward as they did in the other time where there was no much complain except a case of hijack by some hoodlums in which police intervened immediately.

Com. Onanuga further charged them to improve on the past records, though he has confidence in the caliber of the members, but implored them to reach out to the widow, aged, and vulnerable only, most especially those that have not benefited before, while Honourable Akeem Balogun representing Ogunwaterside LG.at Ogun State House of Assembly doubled as the Chairman House Committee on Local Government & Chieftaincy Affairs expressed profound appreciation to the Governor promised to make sure justice is done.

Chief Oduwaye and other members commended the efforts of Ogun State Governor and the Chairman to see that life is better for all and prayed that God will see us through to overcome this trying period.