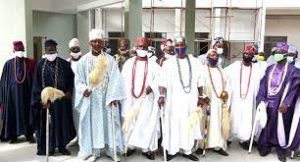 The case which was filed by claimant against the state Governor, Prince Dapo Abiodun alongside the Commissioner For Local Government And Chieftaincy Affairs and the Permanent Secretary in the ministry came up on Tuesday, November 30, 2021 at State high court 4 in Abeokuta.

The claimants had approached the court since 2019 to challenge the recommendations of the review committee set up by the State Government stopping them from parading themselves as monarchs.

The claimants also sought the court order to declare their removal as null and void.

Justice Abiodun Akinyemi in his judgement declared that the appointments of the Coronet Obas remain valid, maintaining that the government failed to write appropriately the concerned individuals to convene their sack to them.

The presiding Judge added that the state government also failed to give the claimants fair hearing before removing them.

Justice Akinyemi however ruled that the entitlements and remunerations of all the Coronet Obas be immediately paid by the defendants from the time of installation.

Earlier in the proceedings, Egba Traditional Council led by its counsel, Mr. Afolabi Fashanu, SAN, had filed an application seeking to join the suit and arrest the judgement set for the day.

The presiding Judge awarded a personal cost of 250,000 naira on Mr. Afolabi Fashanu, saying that as a Senior Advocate, he ought to know better than to file such an application.

Justice Akinyemi noted that since the counsel was not a party in the matter, he declared that the application is frivolous and an abuse of court process.

It would be recalled that on February 6, 2020, Governor Dapo Abiodun demoted 75 Chiefs promoted to Coronet traditional rulers by his predecessor, Senator Ibikunle Amosun.

Senator Amosun had elevated the 75 Chiefs to the Coronet Obas towards the end of his administration in May 29, 2019.

But, on assumption of office, Governor Abiodun set up a committee that reviewed and recommended that the promotion of the traditional rulers from Baale to Obas be reversed.

In February 2020, Governor Abiodun announced the demotion of the Obas as recommended by the review committee appointed by the government. But the 75 Obas who were not satisfied with the recommendation dragged the State Government to court, asking for their reinstatement and payment of their entitlements.

The Coronet Obas when the proceeding was on initially got an interlocutory injunction that maintained their appointment as Coronet Obas till the court finally gave its judgement on Tuesday, November 30, 2021.