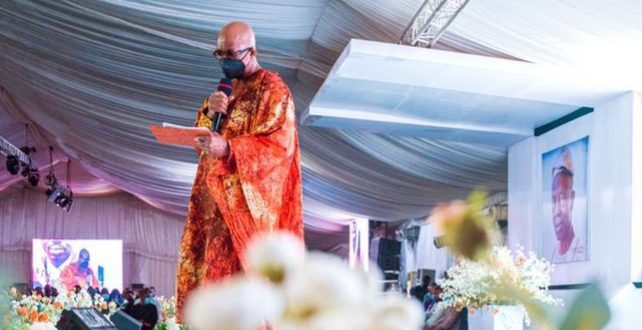 Governor Dapo Abiodun reading a passage from the Holy Bible on the occasion.

Cleric Eulogises Pa Abiodun’s Selfless Service To Humanity As CAN, Anglican Women Organise Service Of Songs In His Honour

IPERU-REMO – The Bishop of Ijebu West Diocese of the Anglican Communion, Rt. Rev. Babatunde Ogunbanwo, has said that secret of a good life of any human being is service to humanity, saying “the death of a righteous soul is precious to God Almighty.”

Bishop Ogunbanwo stated this at the final home journey of the late father of Governor Dapo Abiodun of Ogun State, Pa Emmanuel Abiodun which started on Tuesday, September 7, 2021 with a service of songs organised by the Christian Association of Nigeria (CAN), Remo Area/Ogun State and the Women Organisation, Iperu Anglican Churches, in Iperu-Remo, Ikenne Local Government area of the state.

In his sermon at the event attended by family members of the late octogenarian and top government functionaries, the Bishop of the Ijebu West Diocese of the Anglican Communion, Rt. Rev. Babatunde Ogunbanwo, said secret of a good life of any human being is service to humanity, saying “the death of a righteous soul is precious to God Almighty.”

The cleric, taking his sermon titled: ‘Why the Desire to Die like a Righteous’ from book of Numbers, Chapter 23 verse 10, noted that late Emmanuel Abiodun lived a life of service that clearly indicated that there is humility in service to humanity.

The Bishop, while also noting that the righteous lives for treasures that will last forever and not ephemeral possessions such as houses, certificates and clothes, added that “those people who will die foolish deaths are materialistic while a righteous man lives with eternity in focus”.

The Christian scholar who further noted that the legacy of education lasts forever, said that the governor’s father lived a life of service as a teacher and served God’s purpose in his own generation.

“The legacy of education lasts forever; it cannot be replaced. The righteous people live for treasure and not trash. I recognize that most of things we live for today will end up in trash, the righteous live for things that will last, things that are valuable. They live for fortunes, jewels, the righteous score treasures in heaven where armed robbers cannot have access to.

In his remarks, Governor Dapo Abiodun, while appreciating the Christian Association of Nigeria for organising the service of songs on behalf of his late father, noted that a life of service can be achieved by acts and actions of the people.

Governor Abiodun, while noting that people do not need to be rich to live a life of service to humanity, added that it was important for everyone to live a life that would benefit their fellow human beings.