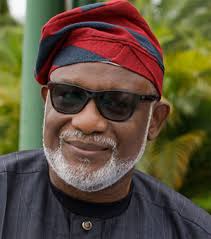 The Bishop of Catholic Church, Ondo, Archbishop Latunji Lasebikan has commended Ogbenini Rotimi Akeredolu giant strides in the delivery of dividends of democracy to the people of Ondo State.
Archbishop Lasebikan gave the commendaton at a Thanksgiving Service to commemorate the first year in office of the governor at the Democracy Park in Akure.
The man of God also commended Ogbeni Akeredolu administration for making its workers happy by paying their salaries promptly.
“It is gratifying to know that you do not owe state workers any salary arrears since inception. It will certainly be unfair and ungodly if this gallant effort is not acknowledged.
“You must thank God for this grace given to you to perform in this direction. You have taken steps to make your workers happy and had taken steps to ameliorate their suffering,” he said.
“A good name is more desirable than all the riches. Mr Governor, I know you, you can dare to be different,” he said.
Earlier in his speech on the occasion, Gov. Akeredolu of reiterated the commitment of his administration to providing more developmental projects in order to industrialise the state.
The governor, who said it was the duty of his administration to continually deliver projects, gave an assurance that the projects would never be abandoned.
“I can assure you that we owe the people of Ondo State an abiding duty to do our best in whatever area we lay our hands on,” he said.
Akeredolu also reiterated the need for the people to pay their taxes in order to guarantee that the ongoing developmental projects continue.
“Taxes are our civic responsibilities, not politics. It is the responsibility of our people and the only way to sustain our strides.
“I implore our religious leaders to help us impress on their members the need to be patriotic, support the government and pay their taxes,” he added.
Also speaking with newsmen, Senator Yele Omogunwa representing Ondo South Senatorial District, urged the governor to concentrate more on youth development and women empowerment.
“In my humble assessment, the governor is someone we should all celebrate for what he has achieved and what he is planning to do for the transformation of the state.
“His various impactful projects visible in all the three senatorial districts will indeed raise the status of this state economically and politically,’’ he said.
While speaking with newsmen, a National Leader of Afenifere, Chief Ayo Adebanjo, commended Akeredolu for the steps taken toward industrialising the state by flagging-off the construction of some factories.
Adebanjo described as significant the governor’s intention to continue the laudable projects left uncompleted by his predecessor.
“Today, I have come to congratulate and rejoice with him for making me proud and for putting smiles on the faces of people of the state,’’ he said.
While inaugurating some projects in Ondo Central Senatorial District to commemorate his administration’s one year in office Ogbeni Akeredolu also reiterated the commitment of his administration to constructing 500 kilometres access roads to link farms to the city.
He said that Idanre community would also benefit from the access roads to be built under the Rural Access Mobility Project (RAMP). “Provision of these roads is in partial fulfilment of our campaign promises and more will follow in a very short time,’’ he said.
The governor thanked the people for their support so far, urging them to continue to give his administration adequate support and cooperation. Earlier, Oba Aladetoyinbo Aladelusi, the Deji of Akure, had commended the governor on the projects executed so far, which he said touched lives.
He said the people would keep on appreciating the excellent performance of the present administration. The traditional ruler also commended the contractors handling the road projects.
Mr. Lanji Akingbulugbe, a representative of Idanre community, said the town, being the largest cocoa producing community in the state, had suffered unimaginable neglect.
Projects inaugurated include the 2.5 km Oke-Lisa Road and the 15 km Idanre-Ijoka road, both in Idanre Local Government Area. Others are the 1.36 km Iwalewa road and 1.3 km Abusoro Road, both in Akure South Local Government Area