Barrister Olubiyi Oladipupo Otegbeye: THE MAN WITH MANY HATS

Olubiyi Oladipupo Otegbeye was born on October 11, 1963 at Oliworo Quarters in Ijebu-Ode, to the family of Late Mr. Festus Oladunjoye Otegbeye of Ilaro, headquarters of Ogun West and Mrs. Anuoluwapo Otegbeye who hailed from the Bamgbose family in Odopotu, Ogun State. He began life in a humble way. His parents were God-fearing, comfortable and contented. Because both parents were seasoned teachers, they gave their children good upbringing and standard education.
Biyi began his education at a very popular nursery school; the Sanni Luba School in Ijebu-Ode. His primary education was at Christ Church School, Porogun Alapo, Ijebu-Ode. Between 1974 and 1979 he attended Comprehensive High School, Ayetoro, Ogun State and later proceeded to CMS Grammar School, Bariga, Lagos for the Higher School Certificate. 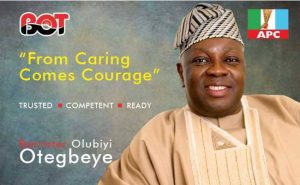 In 1984 and at age 20, he got his Bachelor’s Degree in Insurance at the University of Lagos. He followed up with a Masters’ Degree (MBA) in Financial Management and Accounting between 1985 and 1987. He graduated with LLB in Law at Lagos State University in 2001.
Biyi was admitted to the Nigerian Law School and called to the Bar in 2003 as a Barrister and Solicitor of the Supreme Court of Nigeria. He professionally qualified as an Associate of the Chartered Insurance Institute London (ACII) in 1988.
The insurance guru began his professional career at the United Nigeria Insurance Company Limited (UNIC) in 1986. Between 1990 and 1991 he was the General Manager of Capital Asset Insurance Brokers and in 1991; he became CEO of Excel Insurance Brokers. In 1993 and at the age of 29 he founded Regency Insurance Company Limited. In 2007, he led Regency to the capital market to become a publicly quoted company. Till date he remains the Group Managing Director/Chief Executive Officer of Regency Alliance Insurance Plc. 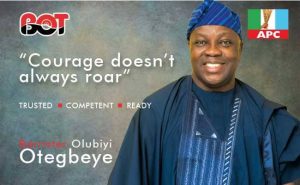 The activities of BOT have occasioned great enthusiasm among his many supporters throughout Ogun State.
Biyi’s political appointments/career started in 2012, when he was appointed by the Ogun State Governor, Senator Ibikunle Amosun, to serve as a member of the fact-finding panel of Gateway Industrial &Petroleum Institute.
In further recognition of his contribution to the development of the nation, he was appointed as Chairman of the Governing Board of the University of Uyo Teaching Hospital in April 2013 by the Federal Government.
In 2015, he contested for the Senatorial seat in Ogun West under the Social Democratic Party. He was inspired by the leadership qualities of His Excellency, Governor Ibikunle Amosun and joined the APC. Today, Biyi is a full and active member of Ilaro Ward 1, Yewa South Local Government of APC. In January 2018, the Governor of Ogun State, Senator Ibikunle Amosun, again appointed him as a member of Ogun State Judicial Service Commission; the appointment which he still holds.
Biyi’s appearance on the political turf is like a beacon of hope in the collective quest of Yewa-Awori people to ensure that an indigene of Ogun West emerges as the governor of Ogun State in the 2019 election for the first time since the creation of Ogun State in 1976.
He is a devoted Christian and a committed family man. His love for God and the people have brightened his path and opened up prospects in politics. Biyi is married to Comfort Aderonke Otegbeye (Nee Alo) and their marriage is blessed with 3 children.
Against this backdrop, opportunity however beckons on him today, to offer himself for more service in our dear Ogun State.

Tags Barrister Olubiyi Oladipupo Otegbeye THE MAN WITH MANY HATS#