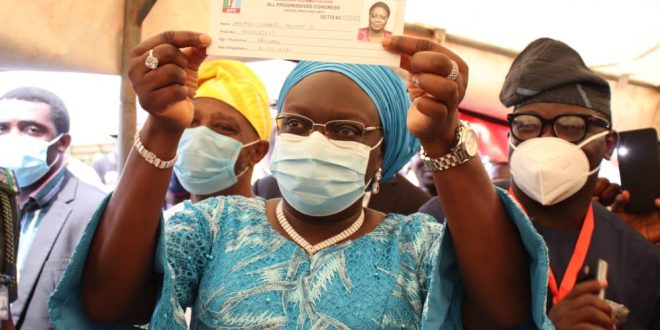 ABEOKUTA – The Ogun State Deputy Governor, Engr. (Mrs.) Noimot Salako-Oyedele has urged members and loyalists of the All Progressive Party (APC), in the State to shun violence and display acts of humility during and after the registration/revalidation exercise.

Oyedele stated this at the Ward 3 Polling Unit, GRA, Ota, in Ado/Odo-Ota Local Government Area of the State after revalidation of her membership and flagged off the exercise.

“Indeed, it is imperative to show acts of responsibility and humility during and after the exercise, we need to shun acts that will bring disorderliness and which will affect the smooth running of the exercise. It is our right to revalidate our membership but let us do it in the spirit of sportsmanship,” Oyedele said.

She emphasised that the responsibility of leaders of the party was to mobilize members for the exercise, noting that politics is a game of numbers and not a social gathering nor club.

“In fact, the benefits of politics is not for the people in power alone, but the collective of our responsibility through being part of the revalidation exercise and become bonafide member of the party. Part of which include appointments, I am glad to say Ogun West has benefited in the present administration of Prince Dapo Abiodun,” Oyedele said.

While imploring party members to troupe out en masse for the revalidation exercise, Oyedele urged those willing to join the party to do so, now that the window of opportunity had been opened for them before its closes on February 25.

Also Speaking, the Chairman, Ogun State membership registration committee, Hon. Ademorin Kuye, said the exercise was critical towards repositioning the party, urging party loyalists to make themselves available for the revalidation exercise and cooperate with the committee to be hitch-free.

Kuye added that being a registered party members would open doors of opportunities for them, especially when it comes to appointments and other benefits in the State.

In their separate remarks, Senator, Kamal Odun, Ado-Odo/Ota Local Government Transition Chairman, Hon. Wasiu Lawal and Chairman APC Ogun West, Alhaji Muhammed Azeez urged party faithfuls and others who were willing to join the party to do so, imploring them to cooperate with the committee, shun violence and distance themselves from the act that could distrupt the exercise.

Publisher and Editor in Chief - Magazine and Online Tel: 08038525526 - 08023339764 - 08055657329 Email: startrendinter@gmail.com
Previous Shasha Crisis : Olubadan Calls For Peace
Next PROLIFERATION OF RADIO STATIONS: SOCIAL IMPACTS AND THE NEED FOR REDEDICATION